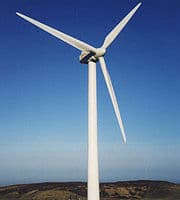 The Environmental Impact of Wind Energy and Wind Turbines on rural and local communities has become surprisingly controversial and a hot topic in both the news and the press. The thought of generating electricity from a free source of energy, the wind, seems like a good idea and one positive way of reducing our dependence on fossil fuels. But the generation of electricity from wind energy using large numbers of wind turbines can disrupt both landscapes and habitats, as well as the rotating turbine blades can sometimes kill birds and bats. 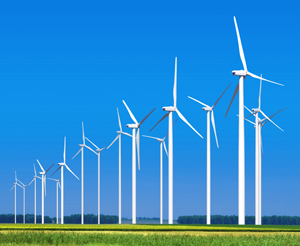 The saying goes that “beauty is in the eye of the beholder”, and attitudes towards wind turbines depends upon the aesthetic judgements made towards their beauty, aesthetics and people’s preference which are subjective as not everyone considers them beautiful. The visual impact on the environment can be minimized through careful choice and design of the turbines. For example, using wind turbines of the same size, height and type and spacing them uniformly across the land generally results in acceptance of most of the aesthetic concerns.

Building wind energy installations with large numbers of turbines can disrupt landscapes, such as visibility at a distance, and its the aesthetics of the landscape that is often a primary reason for people’s concern about siting new wind energy projects. To some, wind turbines appear visually pleasing, while others view them as intrusive industrial machines. Its the thought of change to the local surroundings and landscape that affects most people, but if you asked them which would they rather live near too, the smoking chimneys of a coal fired generating station, the cooling towers of a nuclear plant, or a wind farm, many would choose the latter.

The vast majority of wind farm projects are located on private farmland. As an average wind farm of 20 turbines may expand to well over an area of one square kilometre, yet less than 5% of the land area would be used by turbines. The rest can be utilised for some other functions, for example agricultural, farming. Then wind turbines can safely co-exist with other living creatures, which means that the land does not have to be restricted from other possible uses. The land of a wind farm can be used for wind generation, but also for crops growing, animal grazing, or maybe left as a natural habitat reducing its impact on the environment.

As well as the visual effects on the environment, wind turbines and wind farms can have negative impacts on human health and well-being especially on those people living near wind turbines who are affected by their noise. Like any machine that has moving parts, wind turbines generate noise during their operation. Noise from wind turbines arises mainly from two main sources: (1) mechanical noise from the rotation of the gearbox and electrical generator, and (2), the aerodynamic noise caused by the interaction of the turbine blades with the wind as they rotate.

Noise emission used to be a problem with a few of the earlier wind generator designs, however modern day wind generator designs are much better to the point where mechanical noise produced by their rotation has become insignificant. Therefore the concern of noise pollution in the environment has become one of aerodynamic noise or whooshing sound from the flow of air over the rotating rotor blades. Many modern turbines designs have improved aerodynamic noise simply by changing the width of the rotor blades trailing edges and also by having the blades face “upwind” as opposed to “downwind” of some of the earlier designs.

Shadow flicker is caused by intermittent chopping of the sunlight behind the rotating blades which casts a shadow that appears to flick ON and OFF as the wind turbine blades rotate. The amount of shadow flicker is dependant upon several factors, including the location of people relative to the turbine, the wind speed and direction, the variation in the sunlight. Shadow flicker can be a nuisance to nearby humans, but it is possible to calculate very precisely whether a flickering shadow will in fact fall on a given location near a wind farm, and how many hours in a year it will do so.

Impact of Wind Energy on Bats and Birds

Bats which by nature are nocturnal creatures, fly around at night using echo-location to feed and navigate. When they encounter the fast moving blades of a wind turbine, they are unable to quickly and safely manoeuvre themselves around them so are often times hit by the continuously rotating blades and some are killed. Even when bats are not directly hit by the wind turbine blades, they can still be killed by the instant changes in air pressure created by the blades as they rotate.

Although bat and bird deaths have raised concerns over the safety of wind farms, there are many ways to prevent such occurrences. Many of the early wind farms were planned, constructed, and operated with little or no consideration for the potential impacts to birds or bats. Today, new wind farm installations are designed with not only bats and birds in mind, but with other local animals and insects too. Better wind turbine designs that rotate at slower speeds and predator noises used to deter bats from entering wind farm areas are all helping to reduce fatalities.