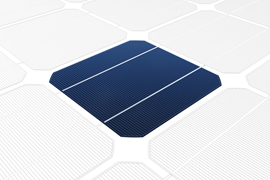 Photovoltaic ( PV ) cells are made made almost entirely from silicon that has been processed into an extremely pure crystalline form that absorbs the photons from sunlight and then releases them as electrons, causing an electric current to flow when the photoconductive cell is connected to an external load. There are a variety of different measurements we can make to determine the solar cell’s performance, such as its power output and its conversion efficiency.

The above graph shows the current-voltage ( I-V ) characteristics of a typical silicon PV cell operating under normal conditions. The power delivered by a solar cell is the product of current and voltage ( I x V ). If the multiplication is done, point for point, for all voltages from short-circuit to open-circuit conditions, the power curve above is obtained for a given radiation level.