Permanent magnet direct current (DC) machines can be used as either conventional motors or as DC wind turbine generators as constructionally there is no basic difference between the two. In fact, the same PMDC machine may be driven electrically as a motor to move a mechanical load, or it may be driven mechanically as a simple generator to generate an output voltage. This then makes the permanent magnet DC generator (PMDC generator) ideal for use as a simple wind turbine generator.

If we connect a DC machine to a direct current supply, the armature will rotate at a fixed speed determined by the connected supply voltage and its magnetic field strength thereby acting as a “motor” producing torque. If however, we mechanically rotate the armature at a speed higher than its designed motor speed by using rotor blades, then we can effectively convert this DC motor into a DC generator producing a generated emf output that is proportional to its speed of rotation and magnetic field strength.

Generally with conventional DC machines, the field winding is on the stator and the armature winding is on the rotor. This means that they have output coils that rotate with a stationary magnetic field that produces the required magnetic flux. Electrical power is taken directly from the armature via carbon brushes with the magnetic field, which controls the power, being supplied by either permanent magnets or an electromagnet.

The rotating armature coils pass through this stationary, or static magnetic field which in turn generates an electrical current in the coils. In a permanent magnet DC generator, the armature rotates so the full generated current must pass through a commutator or slip-rings and carbon brushes arrangement providing electrical power at its output terminals as shown.

A simple DC generator may be constructed in a variety of ways depending upon the relationship and interconnection of each of the magnetic field coils with respect to the armature. The two basic connections for a self-excited DC machine are the “Shunt Wound DC Generator”, in which the main field winding is connected in parallel with the armature. The “Series Wound DC Generator”, has the current carrying field winding connected in series with the armature. Each type of DC generator construction has certain advantages and disadvantages.

• Shunt Wound DC Generator – In these generators, the field (excitation) current, and hence magnetic field, increases with operating speed as it is dependant upon the output voltage. The armature voltage and electrical torque also increase with speed. The shunt-wound generator, operating at a constant speed under varying load conditions, has a much more stable voltage output than does the series-wound generator. However, as the load current increases the internal power loss across the armature causes the output voltage to decrease proportionally.

As a result, the current through the field decreases, reducing the magnetic field and causing voltage to decrease even more and if load current is much higher than the design of the generator, the reduction in output voltage becomes so severe resulting in large internal armature losses and overheating of the generator. As a result, shunt wound DC generators are not normally used for large constant electrical loads.

Another way to overcome the disadvantages of a self-excited DC generator is to allow the field windings to be externally connected. This then produces another type of DC generator called a Separately Excited DC Generator.

As the name suggests, a separately excited DC generator is supplied by an independent external DC power source for the field winding. This allows the excitation current to produce a constant magnetic field flux regardless of the load conditions on the armature. With no electrical load connected to the generator, no current flows and only the generators rated voltage appears at the output terminals. If an electrical load is connected across the output, current will flow and the generator will begin to deliver electric power to the load.

The Permanent Magnet DC Generator can be considered as a separately excited DC brushed motor with a constant magnetic flux. In fact, nearly all permanent magnet direct current ( PMDC ) brushed motors can be used as a permanent magnet PMDC generator, but as they are not really designed to be generators, they do not make good wind turbine generators because when working as a simple DC generator, the rotating field acts like a brake slowing down the rotor. These DC machines consist of a stator having rare earth permanent magnets such as Neodymium or Samarium Cobalt to produce a very strong stator field flux instead of wound coils and a commutator connected through brushes to a wound armature as before.

Permanent magnet DC generators are generally lighter than wound stator machines for a given power rating and have better efficiencies because there are no field windings and field coil losses. Also, as the stator is provided with a permanent magnet pole system, it is resistant to the effects of possible dirt ingress. However, if not fully sealed, the permanent magnets will attract ferromagnetic dust and metallic swarf (also called turnings or filings) which may cause internal damage.

The permanent magnet DC generator is a good choice for small scale wind turbine systems as they are reliable, can operate at low rotational speeds and provide good efficiency especially in light wind conditions as their cut-in point is fairly low.

There are many “off-the-shelf” permanent magnet DC generators available with a wide range of power outputs from a few watts to many thousands of watts. The DC voltage generated by a permanent magnet DC machine is governed by the following three factors:

The most common type of DC generators for wind turbines and small scale wind turbine systems used to charge batteries is the permanent magnet DC generator, also know as the Dynamo. Dynamos are a good choice for newcomers to wind power as they are large, heavy and generally have very good bearings, so you can mount fairly hefty rotor blades directly onto their pulley shaft.

Old style diesel truck or bus dynamos are a better choice for wind turbines as they are designed to generate the required voltage and current at slower speeds with the emphasis on efficiency rather than on maximum power. Also, most bus and truck dynamos can generate power up to 500 watts at 24 volts which is more than enough to charge batteries and power lights for a small scale low voltage system.

Other types of PMDC motors that are suitable for wind power DC generators include traction motors used in golf carts, fork lifts and electric cars. Usually these motors are 24, 36 or 48 volt types with high efficiencies and power ratings. One of the main disadvantages of a permanent magnet DC generator, is that these machines have commutating brushes that carry the full output current of the generator so DC machines used as dynamos and generators require regular maintenance as the carbon brushes used to extract the generated current quickly wear out and produce a lot of electrically conductive carbon dust inside the machine. Therefore, AC alternators are sometimes used.

Car alternators are another very popular choice as a simple DC generator for use as a wind turbine generator, especially among newcomers and DIY enthusiasts as low voltage DC can also be generated by alternators. Most automotive alternators contain AC-to-DC rectifiers that supply DC voltage and current. In an alternator, the magnetic field rotates and the variable 3-phase AC which is generated by the stationary stator coils is converted into 12 volts DC by an internal rectifier circuit. Automotive alternators have the distinct advantage that they are specifically designed to charge 12 or 24 volt batteries.

Enclosed PMDC generators are preferred in wind turbine generator systems to protect them from the elements, but standard car alternators are usually open and cooled by ambient air ventilated through the generator so some additional form of weather protection is require. They also come in a variety of sizes and power ratings designed for small cars to large trucks and while they may be cheap and and readily available, they are not very efficient compared to the larger permanent magnet DC generator.

The key to simplicity and increased efficiency comes from building a direct drive wind turbine with the turbines blades mounted directly onto the generators main pulley shaft. As soon as you introduce gears, belts, pulleys, or any other ways to increase or decrease their speed, you introduce energy losses, additional costs and complexity.

Although a good five or seven foot (1.5 to 2 metres) diameter three-bladed rotor will reach speeds in excess of 1,000 rpm, this is still too slow to be a good match for most common car alternators that rotate at speeds of between 2,000 and 10,000 rpm as they are attached to the cars engine, so a gearbox or pulley system would be required to increase the speed at which the alternator spins, and to increase the output of the alternator.

Also, automotive alternators require an additional external power supply to provide a small biasing current (usually through the dashboard indicator lamp) to their field coils to start the excitation and therefore the generation process before the alternator reaches its cut-in speed. This external field current could be supplied by the attached battery bank but the problem with this is that the batteries would continue to supply current possibly draining the batteries, even when the turbine blades are stationary during periods of zero or little wind. Another problem with modern automotive alternators is that they are built for cheapness and light weight so usually only have small 5/8 inch or 17 mm diameter rotor shafts to mount a pulley on which may be a little on the small side to take the weight and stresses of the rotating blades. 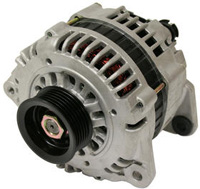 One of the hardest parts of designing a small scale low voltage wind turbine for electricity production is to finding a suitable DC generator. The Permanent Magnet DC Generators is a low speed generator that are pretty reliable and efficient in light winds for use in “off-grid” stand alone systems to charge batteries, or to power low voltage lighting and appliances. They generally have linear power curves with low cut-in speeds of around 10 mph. Unfortunately, old style permanent magnetic DC generators which are larger, heavier and more robust are becoming more difficult to find.

As well as Permanent Magnet DC Generators, the automotive car alternator is also another popular choice among many do-it-yourself people for use as a low voltage DC generators for wind turbines. However, being a an automotive alternator bolted to the side or a combustion engine, they require high rpm speeds to generate power and are not always very efficient. Car alternators also require an external power supply voltage to power the electromagnets that create the internal magnetic field.

Car alternators limit their own current using a built-in regulator circuit which also stops the alternator from overcharging the connected batteries. However, an automotive alternator should never be connected to the battery bank in reverse or run the alternator at high speeds without the battery connected, as the output voltage will rise to high levels (much more than 12 volts) and destroy the internal rectifier.

Low voltage stand alone wind power DC systems are great for charging batteries etc, but if we want to power larger mains connected appliances or have a system that is “grid-tied” we need to either use some form of inverter to change the low voltage DC generated by the permanent magnet DC generator into a higher voltage (120 or 240 volts) AC supply, or install another different type of wind turbine generator.

In the next tutorial about Wind Energy, we will look at the operation and design of a different type of electrical machine called a Synchronous Generator. The synchronous generator is very different from a permanent magnet DC generator because it can be used for generating three-phase grid connected AC or alternating current electricity.