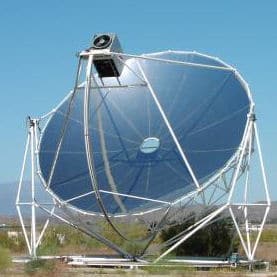 Solar thermal collectors convert solar radiation to thermal energy and most people are familiar with flat-plate collectors located on roofs to provide solar hot water and heating for the home. Generally, the glass used to seal and cover the absorber plate and pipes inside is often of a low iron-oxide type that is anti-reflective to reduce absorptive and reflective losses.

Whatever the type of glass or treatment of the glass is used, the use of a cover glass reduces the transmission of solar radiation to the absorber plate reducing its efficiency. But we can greatly improve the amount of energy absorption by means of concentrating and intensifying more sunlight onto the solar collector by using a technique called Concentrated Solar Power. 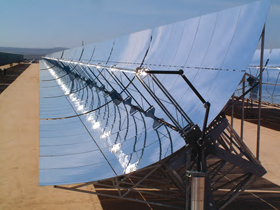 Concentrated Solar Power or CSP for short, uses mirrors, reflectors or lenses to concentrate the sun’s radiant energy into a single beam in order to achieve very high temperatures. A simple example of what concentrated solar power is, would be a kid who uses a magnifying glass to focus sunlight onto a specific area below to produce intense heat. But this time the objective of the concentrator is to heat water and not ants or any other such luckless insects he finds.

The concentration factor, also known as the “number of suns”, of a concentrating solar collector can be greater than 1,000 suns reaching temperatures at the focal point of the receiver (called the “target”) approaching several hundred or even several thousand degrees Celsius depending upon the size of concentrating dish and its solar location. The heat produced can then be used for conventional hot water or to produce super heated steam to turn generators.

Parabolic Dish also known as the distributed-point-focus system uses a large, reflective dish similar in function to a TV satellite dish to focus light on a receiver that is positioned above the dish. The parabolic-shaped reflective mirrors concentrates the solar radiation onto a central focal point to increase the concentrated solar power. Like the parabolic trough concentrator, the parabolic dish is movable allowing it to track the suns position in the sky so that its incident rays are always perpendicular to the aperture area maintaining optimal focus.

Water located at the focal point is heated and pumped into the home were the heat is released into the home and is returned to the solar concentration point to be reheated. The principal use of a parabolic dish reflector is to increase the amount of solar flux onto the dishes focal point producing a lot more thermal energy. Parabolic dish systems can also be used as part of another solar technology called a stirling engine generator. Both dish and Stirling engine system are used to generate electric power.

Although concentrated solar power has many advantages over conventional flat-panel collectors or vacuum tube collectors for producing solar hot water, even the sunniest of places of the world have more than one days of cloud cover. Also, dust, birds, inclement weather, and intermittent sunlight all contribute to inefficiencies in this type of system resulting in increased cleaning of the reflective troughs and dishes.