The kinetic energy of water flowing downhill in rivers or other streams constitutes an energy source very similar to that of ocean currents. However, unlike other forms of renewable energy which rely on solar activity, a rivers flow is part of the hydrological cycle of water evaporation and precipitation in the form of rain. The flow of water in a river can be regulated by means of sluice gates, penstocks or dam building with the kinetic energy of the moving water being used to drive a cross flow turbine at the times most convenient with respect to utilisation. 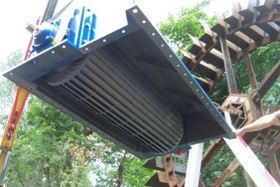 Over the last few decades, small scale hydro-power has become popular because of its clean, renewable and abundant energy resources that can be easily developed. However, finding a suitable and effective water turbine type for a small hydro power system can be a problem. Moreover, relatively high manufacturing cost of the complex structure of the turbine can be a barrier to the development of a small scale hydro energy turbine.

However, energy is always lost when it is converted from one form to another in the form of frictional losses and spillages. Although higher than other types of turbine design, cross flow water turbines rarely have efficiencies better than 85%. However, by careful design, this loss can be reduced to only a small percentage but a rough guide used for small systems of a few kW rating is to take the overall efficiency as approximately 50%. Thus, the theoretical power must be multiplied by 0.50 for a more realistic figure.