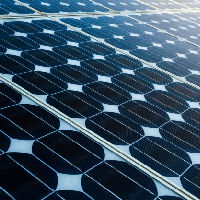 Understanding how to connect solar panels in parallel to give more current is important as the current-voltage (I-V) characteristics of a solar pv panel is one of its main operating parameters. The current output of a solar panel, (or cell) depends greatly on its surface area, efficiency, and the amount of irradiance (sunlight) falling onto its surface.

Photovoltaic cells produce their power output at about 0.5 to 0.6 volts DC, with current being directly proportional to the cell’s area and irradiance. But it is the resistance of the connected load which ultimately determines the amount of amperage supplied by a panel, or pv cell. Amperage, commonly called “amps”, is the measurement of current which is the rate of electrical charge flowing past a fixed point within a circuit, so the more charge the greater the current.

Irradiance is the amount of solar radiation received at a given area on earth so as the current demand from a cell increases, brighter sunlight (given in watts per metre squared, W/m2) is required to produce the full output power, but there is a maximum limit to the amount of current a solar cell can generate no matter how bright and intense the irradiance of the sunlight.

If there is no-load connected to a solar panels terminals, then the panel will generate no current as there is no electrical circuit for it to flow around. But if the terminals are shorted together, the current demand is very high so the photovoltaic panel generates its maximum output current, commonly called its short-circuit current, ISC from the available light. When connecting solar panels together in parallel, the total voltage output remains the same as it would for a single panel, but the output current becomes the sum of the amperage of each panel. Thus the effect of parallel wiring is that the voltage stays the same while the amperage adds up.

When PV panels are wired electrically in parallel, the positive (+) terminals of all the panels are connected together (positive to positive), and all the negative (-) terminals are connected together (negative to negative), until all the panels are wired in parallel and you are left with one single positive terminal and one single negative terminal to attach to your regulator and batteries. Note that series strings of PV panels can also be connected in parallel (multi-strings) to increase current and therefore power output.

Solar Panels in Parallel of the Same Type

In this scenario, all the solar PV panels are of the same type and power rating. The total current output becomes the sum of the current rating of each individual panel but the parallel connected voltage is equal to the panel voltage as shown.

Using the same three 12 volt, 5.0 ampere pv panels from above, we can see that they are connected together in a parallel. The combined connection produces a total of 15 amperes (5 + 5 + 5) at 12 volts DC, giving combined wattage of 180 watts (volts x amps), compared to the 60 watts of just one single panel. If the array consisted of “n” number of solar pv panels with exactly the same electrical characteristics, then the total current output would be I1 times “n” (I*n) amperes with the output voltage being equal to V1. Thus the total power output of the combination will be equal to V*I*n watts.

In this method all the solar panels are of different types and therefore power rating but have a common voltage rating. That is the same nominal voltage is available from all the panels. We have seen previously that for parallel connected panels their currents add together, so no real problem there, just as long as the panel voltages are the same and the output voltage remains constant. This parallel combination produces 12 volts DC at 9.0 amperes, generating a maximum of 108 watts. Again the total output current, IT will be the sum of the individual panels which will depend on the number of connected panels. As before the output voltage remains the same at 12 volts.

Note that while manufacture’s will state a maximum or peak wattage (40W, 100W, 150W, 240W, etc.) for a panel, abbreviated WP (watts-peak), this wattage value is where the nominal voltage and current ratings of the panel apply on the I-V characteristics curve. For example, 12 volts x 5 amps = 60 watts. However, the short-circuit current, ISC is the panel current measured in full-sun (1000 W/m2) when the positive and negative terminals are shorted together. Thus ISC is the maximum current that a panel is capable of producing when the voltage across it is zero (when the solar panel is short circuited).

A panels short-circuit current depends on a number of factors such as the area of the solar panel, the irradiance, temperature, etc. But a panels ISC can be as much as 10% higher than the panels nominal current rating (IMP) which may not sound very much but could result in excessive over currents through cables for large parallel combinations of panels. Then while our simple example has a nominal current of 9 amperes at maximum power, it could potentially be higher at 9.9 amperes (9*1.1). Then it is this higher current value which needs to be considered when installing cabling between parallel connected panels and DC loads, etc.

It is also possible to connect or wire panels together in series strings and connect these strings in parallel. Wiring pv panels in series and the series-strings in parallel increase both the maximum voltage and current rating of the array which allows the array to be more compatible with inverters or charge controllers typically designed to accept higher voltage and current inputs, for example, 200 volts at 20 amperes. Of course this assumes the panels have identical characteristics and that there is the same number of panels per string so that the amperage of the series-strings add up while the voltage of each string stays the same.

Here all the solar panels are of different voltage ratings but have the same nominal current. The individual panel currents will still add together as before whether their strengths are the same or different, but this time the output voltage will be limited to the value of the lowest panel in the parallel combination, in this case 8 volts due to this voltage mismatch. Then in this simple example the parallel circuit will produce about 8 volts at 15 amperes.

However, in reality the overall output voltage of the parallel combination will be somewhere between the lowest panel voltage and a mean (average) value determined by the rest of the panels in the array. At low output voltage levels this mismatch may not be a problem, but as the solar irradiance increases towards or beyond full sun (1000 W/m2) the mismatch in the current-voltage (I-V) characteristics of each photovoltaic panel can cause significant power loss in a large array, so is best to be avoided. After all you would not connect a 6 volt battery in parallel with a 12 volt battery and expect the combination to produce a perfect 12 volt output, or the 6 volt battery not to overheat, which it will. But for this simple tutorial we will assume it to be equal to the lowest panel voltage value.

However, looking at the datasheet of the photovoltaic panels we can see that the maximum power point voltage (VMP) and current (IMP) values are different between the 80 watt panels and the 100 watt panels. Thus the panels are not the same as:

The characteristics given for the 80 watt panels are:

and the characteristics given for the 100 watt panels are:

Clearly, although all four panels are rated at 12 volts, their current-voltage (I-V) characteristics are very different, so connecting them in parallel is not easy.

We have stated above that it is not advisable to connect solar panels in parallel with different voltage values, and while it is not perfect, connecting pv panels together with different nominal current ratings is slightly better than a voltage mismatch but it will be the panel with the lowest current rating which will decide the total power output.

Then as the parallel current is restricted by the lowest value panel, (panels 1 and 2), the total power output is calculated at 300 watts and not the expected 360 watts, a reduction of nearly 17%. Then clearly when connecting solar panels in parallel it is more efficient to use pv panels of the same characteristics.

We have seen here how to connect solar panels in parallel to increase the available current. Thus “parallel connect pv panels are about current” as IT = I1 + I2 + I3, etc. so parallel wiring = more current. How many solar pv panels you connect together in parallel depends on what amount of current you are aiming for or the number of solar panels you have available, but you MUST take into consideration the possible short-circuit current, ISC value of all the panels (modules).

Thus panels of different types, monocrystalline or polycrystalline or with different WMP wattage values, for example 40 watt together with 50 watt should not be connected together in parallel as it would not produce the expected 90 watts (40 + 50), thereby wasting your money on the larger 50 watt panel.

Solar photovoltaic panels are a great way of producing electrical power for free and are available in a range of wattage values from less than 10 watts to over 200 watts to suit many solar applications. But in order to achieve the highest efficiency and return on your investment from your parallel connected array, positioning, sun angle and the amount of irradinace are just as important as using the same make and model of solar panel. A little thought will help save you a lot of money.

For more information about connecting solar panels in series, or to obtain more information about the different types of solar panels available you can use to connect in parallel, or to explore the advantages and disadvantages of using solar power in your home, then Click Here to order your copy from Amazon today and learn more about designing, wiring and installing off-grid photovoltaic solar electric systems in your home.