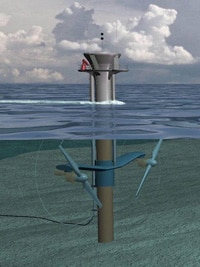 Tidal Energy is the Immense Energy of the Tides

Tidal Energy is another type of renewable energy resource that utilises large amounts of energy within the oceans tides to generate electricity. As we all know from our science lessons, tides are caused by the gravitational forces pulling upon the Earth by both the sun and the moon. As both the sun and moon’s elliptical orbits vary around our planet, the gravitational forces of the two cause our seas and oceans to rise and fall in a continuous and predictable manner. 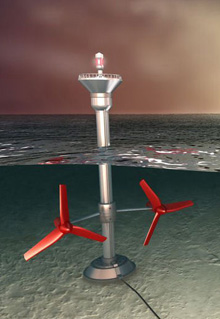 Another tidal energy design that uses the currents created by the ebb and flow of the tides is called Tidal Stream Generation. Tidal stream generation is very similar in principle to wind power generation except this time water currents flow across a turbines rotor blades which rotates the submerged turbine, much like how wind currents turn the blades for wind power turbines. In fact, tidal stream generation areas on the sea bed can look just like underwater wind farms and in areas where the coastal currents are strong, a suitable tidal stream turbine can generate as much free tidal energy as a wind turbine at the same speed and almost four times the size.

Tidal energy has many advantages compared to other forms of renewable energy with its main advantage being that it is completely predictable, which means power generation is predictable too, unlike wind or solar energy. Another advantage is that the tidal turbines are located out of site underwater, and therefore produce no harmful emissions or noise.

However, like many other forms of renewable energy, tidal energy also has its disadvantages such as its inflexible generation times dependent upon the tides and the fact that it operates in the hostile conditions of the open oceans and seas which can be a stormy and violent environment, resulting in the tidal turbines being destroyed by the very energy they were designed to capture.

2 Comments » for Tidal Energy to Generation