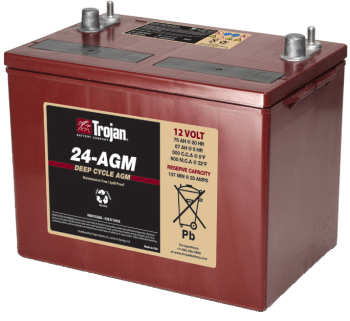 Photovoltaic solar panels produce electricity whenever the sun shines on them. Stand alone (off-grid) and battery backup grid connected PV systems require a single battery or a group of Deep Cycle Batteries called a “battery bank” wired together to store the generated solar energy. The photovoltaics charge these deep cycle batteries during the daylight hours so that you can have electricity at night or on cloudy days. Then storage batteries are an essential part of any stand alone or grid-tied alternative energy installation and which themselves can determine the DC operating voltage of the whole photovoltaic solar system. 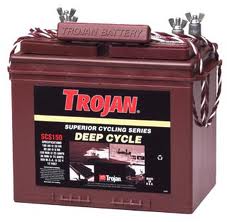 In this tutorial about “deep cycle batteries”, we are mainly interested in true deep cycle batteries which are ideal storage devices for solar energy systems and can be characterised (in addition to their ability to be recharged) by high power density, high discharge rate, flat discharge curves, and good low-temperature performance.

But not all secondary batteries are the same, there are many different types of batteries available, with each type designed for a specific applications. Although similar to ordinary car batteries, deep cycle batteries used in solar power systems are especially designed for the type of charging and discharging cycles they need to endure. The most common type of batteries used in solar PV applications are maintenance free “lead acid batteries” as this type of battery is the most cost effective for home energy storage.

Lead acid batteries are one of the oldest and most common battery technologies and are made up of three basic parts: a negative electrode, a positive electrode, and an electrolyte. The black coloured negative electrode is made of lead (Pb), and the red coloured positive electrode is made of lead dioxide (PbO2). An insulator or separator is used to electrically isolate the two electrodes. The electrolyte used to cause the chemical reaction between the two electrodes is dilute sulfuric acid (H2SO4), which is an acidic liquid that provides the sulfate ions for the discharge reactions.

Wet lead acid batteries are usually the least expensive, but require adding distilled water (H2O) occasionally to replenish water lost in evaporation during the normal charging process. Then basically, the negative electrode gives up electrons to an external load, and the positive electrode accepts electrons from the load and the electrolyte which is typically a liquid in deep cycle solar batteries provides the pathway for charge to transfer between the two electrodes as shown.

A basic functional diagram of a typical lead acid cell is shown on the right. A plate of solid lead serves as the negative electrode, and a plate of lead dioxide serves as the positive electrode. Both electrodes are immersed in a sulphuric acid solution called the “electrolyte”.

The result is that a potential difference, more often called a voltage, develops between the electrodes and it is this voltage that is used to drive current through an external load. The maximum deliverable current generated by the lead-acid battery depends on the mass and volume of the cell. In a lead acid battery made from lead acid cells connected in series (negative-to-positive), the overall terminal voltage depends on the number of cells connected together within the battery.

Deep cycle solar batteries used for alternative energy installations have from about 200 to 2,500 ampere-hours capacity. The specified capacity of a battery is determined by how much energy is needed and for how long must the battery supply this energy. The more electrical energy that is consume the larger the battery must be and the solar power source must therefore be larger to recharge the larger battery.

Lead acid batteries are the only batteries suitable for alternative energy systems but the continuous cycle of discharging a battery into a load (night time hours) and then recharging the battery (sunlight hours) many times over requires a different type of battery as not all lead acid batteries are the same. The most important requirement of a battery is whether it is a Deep Cycle Battery or a Shallow Cycle Battery.

Consider automotive starting batteries. Car batteries are cheap to buy but are designed to provide high amperes of current for very short periods of time (less than 10 seconds) to operate the starter motor and turn over the engine. After the car has started, the battery is then trickle charged by the cars alternator. Even on cold frosty mornings the cars battery is only discharged to less than 10% of its rated capacity at start-up so is designed for this very shallow cycle service, (100% to 90% state of charge).

As a car battery is designed to deliver high currents for very short periods of time it is therefore made of many thin lead plates giving a large surface area for the chemical reaction to occur. These thin lead plates do not have the necessary mechanical strength for repeated cycling over a period of many years and wear out very quickly after only 200 to 400 cycles. Therefore shallow cycle car batteries which although they work, are not designed for a long term solar power system which requires a much deep cycling service.

Deep Cycle Batteries on the other hand are designed to be repeatedly charged and discharged by as much as 80% of their full capacity (100% to 20% state of charge) without sustaining any serious damage to the cells before recharging, making them an ideal choice for solar photovoltaic system as well as marine applications, golf buggies, fork lift trucks and other such electric vehicles. Although deep cycle batteries uses the same chemical reactions to store energy as their automotive battery cousins, deep cycle batteries are made very differently.

The physical size of a deep cycle battery is much larger than a regular car battery due to the construction and size of the lead plates (electrodes). These plates are made of solid lead usually doped with Antimony (Sb) and are many times thicker than the thinner sponge type plates of a car battery. This means then that deep cycle batteries can be repeatedly discharged almost all the way down to a very low charge and it is not uncommon for deep cycle batteries to be emptied (discharged) to as much as 20% of their total capacity before energy ceases flowing from the battery.

Deep cycle batteries are designed specifically for storing the energy generated by a photovoltaic PV systems and then discharging this stored energy for use on a consistent, daily basis. One of the main requirements for deep-cycling batteries for solar applications is maximum cycle life, that is how many times can the battery be charged and the discharged or deep cycled.

Deep cycle batteries can be recharged in a variety of different ways. The most common method is the use of an external charging unit connected to a source of electrical power such as a wall socket. In an alternative energy system, the batteries are charged by solar panels via a solar charge controller that ensures the maximum output from the solar panels or array is directed to charge the batteries without overcharging them. A deep cycle lead acid battery can generally be charged at any rate that does not produce excessive gassing, overcharging, or high temperatures. The battery absorbs very high current during the early part of the charge when its state of charge is at its lowest, but there is a limit to the safe current as the battery becomes fully charged.

If a deep cycle lead acid battery is connected to a load for a long time without maintaining its charge, the battery gradually discharges its power into the load. As the current gradually decreases, and the electrodes become coated with contaminants as the specific gravity of the electrolyte changes. This contamination inside a lead acid battery is called “Sulfation”. Eventually, all the chemical energy contained within the electrolyte is converted into electrical energy.

At some point the battery process stops as the battery can no longer deliver power to a load. The current drops to zero, and a potential difference no longer exists between the electrodes in the cells. The amount of power that a lead-acid cell battery can deliver is a function of the electrolyte (specific gravity and purity) and the quality of the negative lead electrode and positive lead-dioxide electrode.

Over time, sulfation interferes with the ability of the battery to accept, store and deliver a charge, and if left unchecked the quality of the battery components degrade, and the battery performance decreases rendering the battery useless far short of its designed life. The fastest way to destroy any lead acid battery is to allow it to discharge completely and let it stand uncharged for a long period of time. So due to chemical interactions inside a lead battery, it must be used on a regular basis or sulfation of the plates will occur.

However, if a current is driven through the battery by connecting an external power source (this is commonly called recharging, and is simply the inverse of when the battery delivers its power to a load and in this case, the battery is now the load), for a period of time (negative-to-negative and positive-to-positive), the electrochemical energy in the battery is restored, and the battery can be used again. The cycle of discharging a battery into a load and then recharging the battery can be repeated many times over the useful life of a battery but use a hydrometer regularly to check the specific gravity and top-up with distilled water when fully charged.

We now know that the basic building block of a lead acid battery is the 2-volt cell. A battery bank used in off-grid and stand alone solar power, or wind power system is a collection of connected 2 volt cells, 6 volt batteries, or 12 volt batteries that supply power to the household in case of mains power failure or low production from renewable energy sources or a solar array. Individual deep cycle batteries are wired together in series to produce 12 volt, 24 volt, or 48 volt configurations.

Deep cycle batteries can also be connected together in parallel to increase the current capacity of a battery bank. The battery bank supplies DC power to an inverter, which produces AC power that can be used to run appliances. The decision to select either a 12 volt, 24 volt, 36 volt or 48 volt battery bank will be determined by the inverters input, the type of battery you select, and the amount of energy storage you require.

Below shows an example of connecting batteries together of different voltages, such as 6 volt and 12 volt batteries, to produce a 24 volt battery bank. Any number of batteries can be connected together in series to produce an output voltage that is a multiple of the battery voltage. In our example this is 2 x 12 volts = 24 volts. Likewise, batteries connected together in parallel increases the current by the number of branches. However, it is better to limit the number of connect branches to a maximum of three (3) as parallel battery banks tend to circulate unwanted currents from branch to branch.

One final comment about battery maintenance. Lead acid deep cycle batteries are the most dangerous part of any solar or wind power system. Gloves, eye protection such as goggles and masks as well as old clothes must be worn when handling lead acid batteries and electrolyte as “battery acid” both burns and irritates skin and eyes.

Also hydrogen gasses and fumes emitted during charging of these lead acid deep cycle batteries is both an irritant and potentially explosive so ventilate the battery banks and area well at all times. Clean any spillages of electrolyte on or around the batteries and check the battery terminals and cables for tightness lubricating with petroleum jelly if needed. With proper care and maintenance, deep cycle lead acid batteries will have a long service life in any solar powered PV system.