Ocean Thermal Energy Conversion or just simply “OTEC”, is another marine based technology that extracts the potential energy stored in the worlds oceans using the various temperature layers in the water. The worlds oceans are considered to be one of the most powerful sources of energy we have with the water flowing around the seas and oceans in the form of tides, waves and currents containing vast amounts of untapped energy. But as well as the well known wave and tidal power sources, the water within the oceans has the immense capacity to absorb and hold heat.

The ocean can be thought of as one large solar panel being heated up everyday of the year by the sun and on an average day, the water near the surface absorbs huge amounts of thermal heat from the rays of the sun. So on average, the oceans warm up gaining energy during summer and cool down losing energy to the atmosphere during the winter. As the seas and oceans cover over 70% of the Earth surface it only makes sense to try and capture this thermal energy stored within the oceans, and Ocean Thermal Energy Conversion allows us to do just that. 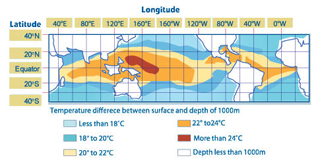 Ocean thermal energy conversion, (OTEC) is another form of ocean based energy production. OTEC works by using the difference in temperature between the oceans surface water near to the sun and the cold water at much deeper levels to run a heat engine and generator providing a clean source of energy.

Below this warm surface layer where the suns rays cannot penetrate, the oceans water becomes colder as the depth increases until at about 3,300 feet (1 kilometre) down the temperature of the water drops to about 3.0oC (38oF). Continuing down below this depth, the deep layer, the water temperature drops only a few degrees further until it reaches the ocean floor. Thus, a huge reservoir of very cold water exists below at depths greater than 3,300 feet.

The result of this is that the oceans contain two distinct physical layers of temperature due to the density of the water. The warm water layer being located at the surface as it is less dense where as the colder water below a depth of 3300 feet, (1,000m) is more dense keeping it at the bottom of the ocean. Then we can see that a temperature difference of about 22 to 25 degrees Celsius (40 to 45 degrees Fahrenheit) exists between the surface of the oceans and the ocean floor.

The amount of thermal energy extracted from this temperature difference within the ocean is dependent upon the efficiency of the type of thermal system used. Currently there are three basic ocean thermal energy conversion systems available that exploit the natural temperature difference between the surface and the depths of the ocean and these are: “Open-cycle OTEC”, “Closed-cycle OTEC” and hybrid “OTEC”.

Ocean thermal energy conversion technology has many benefits to the environment offering a potential source of reliable renewable energy that creates no harmful emissions. OTEC is a source of clean, renewable energy which harnesses the seawater for electricity generation and as it operates using the oceans water, its source of fuel, the oceans water, is abundant and almost unlimited. One main advantages of an OTEC system is that it can provide more than just electricity.

The evaporation process of turning the sea water into steam can also be used to generate hydrogen gas, one of the main elements of water for use in powering hybrid vehicles as well as condensing the steam back to produce clean water for both drinking and agriculture. As the deep sea water brought up from the depths is very cold it can be piped ashore for use in refrigeration, air conditioning and cooling of local buildings.

However, there are some disadvantages of ocean thermal energy conversion which include the high capital cost of installing a rig out at sea and being an ocean based technology, it has the potential for damage and destruction of the equipment from the stormy and hostile ocean environment it operates within.

Another problem with OTEC is the potential for harmful working fluids and liquid substances that could leak into the ocean if the sealed pipes were ever damaged as well as the habitat disruption in the surrounding ocean due to the installation of these pipes, ducting’s and rigs.

Ocean Thermal Energy Conversion, (OTEC) has a long way to go before a full-scale implementation of the technology can become a reality. OTEC plants do not consume the Earth’s natural fossil fuel resources and do not produce harmful environmental pollutants such as carbon dioxide and methane as a result of combustion with mini OTEC plants operating around the world showing that OTEC systems will one day become a feasible, efficient and renewable source of energy as the technology improves.

For more information about “Ocean Thermal Energy” and how it uses the temperature difference of the oceans waters to generate electricity, or to explore the advantages and disadvantages of OTEC systems on the environment, then Click Here and order your copy from Amazon today and learn more about ocean thermal energy and the various energy harvesting technologies available.