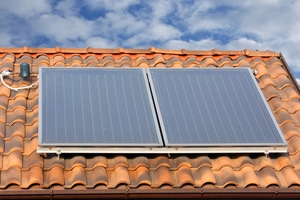 Solar energy is free energy that we receive from the sun in two basic forms: Light and Heat. There are two ways of converting these forms into usable energy for the home. The first is by using the suns photon light energy to generate an electrical current, known as the photovoltaic process which we look at in the Solar Energy tutorials. The second, is by harnessing the sun’s heat energy using solar thermal collectors to produce solar hot water, solar thermal energy, solar pool heating, solar space heating and solar cooling, etc.

It is important to understand that Solar Thermal Energy is not the same as solar power or solar photovoltaic energy as photovoltaics convert the suns light directly into electricity. However, solar thermal energy can be used to concentrate the rays from the sun creating heat which is then used to produce steam, which turns a generator to make electricity.

Amount of electrical energy and gas energy used today to heat domestic water and for space heating in our homes and offices is enormous. The term “solar thermal energy” systems represents solar thermal heating and solar hot water technologies and devices which use the energy from the sun to provide hot water and heating for our homes, offices, factories and other such applications by using renewable solar energy.

Solar thermal energy systems typically incorporate a roof mounted solar energy collector commonly called a “solar thermal collector” which receives sunlight and changes it into usable heat producing pollution-free heating and hot water, reducing the demand for electricity and natural gas as well as other heating fuels and of course the bills.

Solar hot water heating systems can be characterised as either direct or indirect, depending on whether household water is heated directly in the solar collector or via a separate heat exchanger.

The amount of solar radiation that the world receives is significant enough for solar thermal technologies to be an integral part of a clean energy future in any location. Solar thermal systems are composed of three main elements: a solar collector(s), insulated heat transport piping, and some form of heat storage such as a hot water tank. Active solar thermal energy systems also use pumps and/or fans to distribute the heat, electronic timers, controls and thermostats and in colder climates, antifreeze and other such chemicals for protection.

Even an old piece of garden hosepipe placed in a sunny position on the ground can be used to pre-heat the water flowing through it before it enters a standard electrical hot water heater. While this set-up will definitely work, it has its limitations in efficiency and practicality especially at night or in the cold winter months.

The amount of solar heat produced by solar thermal collectors varies according to the collector design, the surface area of collector tubes as well as the local climate and site conditions and there are several types of commercial solar thermal collectors available such as: Flat Plate, Evacuated Tube, Integral Collector Storage (ICS), Thermosiphon and Concentrating Solar Power (CSP). They all do the same job, produce “solar hot water”, with each type having its own applications, advantages and disadvantages.

Solar thermal collectors capture the suns heat for hot water heating and/or space heating and which are typically installed on the roofs were they are exposed to the maximum solar radiation for maximum efficiency. Most solar hot water collectors are passive devices consisting of boxes, frames, tanks or closed tubes that contain the following basic parts:

• Flat Plate Collectors – Flat plate solar thermal collectors are the most common and simplest type of solar collector available for low to medium temperature home solar hot water and warm air space heating. Most Flat Plate Collectors typically consist of a number of individual copper pipes or a single coil which is affixed to a dark heat absorbing plate sealed within a large insulated wooden or metal box. The sealed thermal box is covered with a tempered glass or transparent plastic cover to allow the suns radiant energy to be absorbed by the copper tubing producing solar hot water. Flat plate solar collectors are easy to construct from a wooden box and a few copper pipes making them an ideal beginners project for entry into the world of the solar thermal energy.

• Evacuated Tube Collectors – ”Evacuated tube collectors” consist of rows of parallel, transparent glass tubes. Each tube consists of a metallic heat absorbing material, usually copper with the entire tube being “evacuated” of air (hence their name), and then sealed to form a vacuum within the glass tube. This vacuum helps the collector to achieve extremely high temperatures as the vacuum acts as a highly efficient insulator around the central heat absorbing material.

As air is a good transmitter of heat energy, the vacuum within the tube prevents the heat from being transmitted from the absorber to the outside cooler glass. Water or oil transfers the absorbed heat from the solar collector to a storage tank, where it is used for heating purposes.

Due to their improved efficiency compared to flat plate collectors, evacuated tube collectors are generally used when medium to high temperatures or higher volumes of solar hot water are needed as well as for process heating and solar air conditioning systems.

• Integral Collector Storage – An “integral collector storage” or “ICS” system combines the solar collector and storage tank within a single roof-mounted unit. Although an Integral Collector Storage cannot produce as much solar heat as the previous systems, it can provide a reasonable amount of solar hot water, or it can serve as a cost effective pre-heater for a conventional electric or gas water heaters. ICS solar thermal energy collectors are referred to as a passive devices because they do not require pumps, thermostats, controllers, sensors, wiring or electricity to make hot water, just point them at the sun.

This continuous heating and flowing action as the hot water due to natural convection circulates the water through the collectors providing a tank full of hot water at the end of the day. Like the previous ICS system, thermosiphon systems are also passive systems making them automatic, simple and reliable. However, the main disadvantage of a thermosiphoning system is that at night or in cold periods the heated water in the storage tank above could change direction causing the solar collector to become radiators dissipating the heat back into the atmosphere. Also, the weight of the water filled tank and tubes on top of a roof may require that the roof or supports it sits on to be reinforced.

The direct solar radiation of the sun can be concentrated and collected by using reflectors, mirrors, troughs and dishes called Solar Concentrators producing a single focal point of extremely high temperature. The heat generated by concentrating solar power or CSP technologies, is then used to operate a conventional power generator. The high temperature solar heat collected during the day can also be stored in liquid or solid media like molten salts, ceramics, concrete or, in the future, phase-changing salt mixtures. At night, it can be extracted from the storage medium to continue turbine operation.

• Parabolic Troughs – A “parabolic trough” CSP systems consist of mirrored parabolic curved shaped reflector that focuses the suns energy to a receiver pipe located at the focal point of the parabolic curve heating a transfer fluid, usually oil based due to the high temperatures involved, flowing through the pipe. The transfer fluid then generates superheated steam which is fed to a turbine and electric generator to produce electricity. These Parabolic Trough Reflectors are generally attached to some form of solar tracking system which tracks the suns movement from East to West during the day so that the sun is continuously focused on the receiver pipes for maximum efficiency. 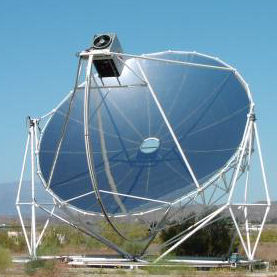 • Solar Dish Engines – A “solar dish engine system” is another type of solar concentrator. A Solar Dish Collector consists of many small glass mirrors arranged together in the shape of a parabolic dish. The mirrors reflect sunlight onto a power conversion unit which is mounted above the dish at the focal centre (similar to a satellite TV dish).

The power conversion unit includes a solar receiver that absorbs the solar energy and transfers it to the solar engine. The engine then converts that energy to heat. The thermal receiver includes tubes for the transfer fluid usually hydrogen or helium that transfers heat to a generator to produce electricity. Solar dish/engine systems use automatic dual-axis collectors to track the sun.

• Solar Power Towers – ”Solar power towers” use thousands of sun-tracking mirrors called heliostats to concentrate sunlight onto a receiver located on the top of a tall central tower. The Solar Power Tower generates extremely high temperatures at the focal point of the array of mirrors heating a transfer fluid such as molten nitrate salt that is then used to generate steam to power a turbine-generator which is used to produce electricity. The molten salt reaches about 1,050 degrees Fahrenheit in the receiver before being stored in a tank where it can retain its heat efficiently for several hours or even days before being used to generate electricity.

We have seen that the two main components of a typical domestic Solar Thermal Energy system which can be used to produce solar hot water are, a water storage tank and a solar thermal collector that absorbs the heat from the sun. The two main types of solar thermal collector available for domestic applications are the Flat Plate Collector and the Evacuated Tube Collector which can produce more than enough solar hot water for a typical household.

For industrial and commercial applications, “solar thermal energy” currently leads the way as the most cost effective solar technology on a large scale. It currently beats other forms of alternative energy systems, and it also can beat the cost of electricity produced from burning fossil fuels such as natural gas. Spain and Australia are the current leading countries in commercial solar thermal energy production in which Spain already produces a large portion of their electricity usage though their solar thermal energy power tower and solar dish/engine facilities.

So is solar thermal energy right for you?. Most likely, using the suns energy to produce solar heat water can reduce household hot water bills by up to 60% or more each year, saving thousands of American dollars or British pounds for the average family home over the lifetime of a solar hot water system. Solar thermal energy systems also help conserve our natural resources and the environment by reducing greenhouse gas emissions as less fossil fuels are burnt to generate electricity just to heat water but consider this, for every Dollar, British Pound or Euro you spend on making your home more energy efficient, you can reduce the size, cost and complexity of a domestically installed Solar Thermal System.

In the next tutorial about “solar thermal energy”, we will look at Flat Plate Collectors and see how they convert the warmth of the sun into hot water.