A Solar Power Tower also known as a Central Receiver, is the big daddy of all concentrating solar collectors. Solar towers uses hundreds if not thousands of small sun tracking mirrored solar dish collectors, called heliostats similar to the ones in the previous parabolic and dish collector tutorials that are used to reflect the sunlight directly onto a centrally located heat absorbing receiver.

The solar power tower name comes from the fact that the concentrated solar power or CSP, is focused not at the focal point of each heliostat dish but at the top of a very tall vertical tower. The sunlight from many mirror like dish reflectors spread over a large area is focused to one central point achieving an extremely high temperature which is used to produce high pressure steam which is then used to generate electricity.

A power tower has a circular array of large two-axis tracking reflective dishes or flat multiple mirror heliostats on the ground that accurately follow the sun’s path across the sky during the day. These reflective dishes capture and concentrate the sunlight onto a central receiver mounted at the top of the high “solar power tower”. These “heliostats” are basically large mirrors equipped with computer controlled sun tracking mechanisms that keep the mirrors aligned so the reflected rays of the sun are always aimed at the blackened heat absorbing receiver creating a focal point. For multiple mirror heliostats, the position and orientation of the individual mirrors on top of the supporting structure is different for every heliostat within the same heliostat field to take account of its relative position and angle towards the tower.

The layout and positioning of the heliostat field is determined by the position of the solar power tower itself and its geographic location. Heliostats located nearest to the solar tower are the most efficient as the reflected sunlight has less distance to travel through the air. Also the nearest heliostats are less prone to shading from their neighbouring heliostats, but are affected by the tower. Being nearer, they also require less precise solar tracking of the sun.

However, heliostats placed far away from the solar tower are less efficient as the strength of the reflected solar energy reduces the longer the distance travelled. The outer heliostats have to be installed further away from their neighbouring heliostats to eliminate shading and require highly precise tracking mechanisms to keep the reflected sunlight at the correct position on the tower.

The height of the solar tower on which the central receiver is mounted also plays a role in the layout of the heliostat field. Higher towers of between 80 to 110 metres (250-to-350 feet) are preferred as larger denser heliostat fields can be used reducing the effects of shading and also of land usage. However, this is offset by increased tower and installation costs, as well as the expense of extremely precise tracking requirements for a large majority of the heliostat field, and not just the ones furthest away. 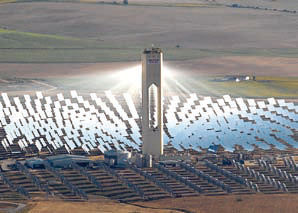 A high temperature heat transfer fluid or working medium in the central receiver absorbs the highly concentrated radiation reflected by the heliostat field and converts this thermal energy into superheated high pressure steam to be used on the ground to spin a series of turbines, much like a traditional power plant to generate electricity.

By focusing the sunlight and therefore concentrating the solar thermal energy in this way very high temperatures can be achieved from 800oC to well over 1,000oC. However, not all of the heliostats are used to concentrate their reflected solar energy on the tower at the same time or at the same focal point as extremely higher temperatures may cause the receiver to overheat and melt.

The heat transfer medium used for most modern type solar power towers includes water/steam, molten salts, liquid sodium, oil and even air. Early solar tower designs focused the suns rays to heat plain water in a high pressure cold water type tank mounted at the top of the tower and then used the resulting generated steam to power a turbine generator. Nowadays, the newer solar power tower uses molten salt such as sodium nitrate (NaNO3) as an efficient transfer medium but water is still used as a coolant for the receiver. The use of molten salt means that the absorbed heat can be stored for many hours and used at night or on low solar energy days.

The pre-heated liquid salt at a temperature of about 300oC is pumped up the tower from a cold storage tank through the heat absorbing central receiver where it is heated up to over 600oC by the concentrated sunlight and then flows down the tower with the aid of gravity into a hot liquid storage tank for use later by the generating plant.

When electrical power is required by the generating power plant located at the foot of the tower, the hot stored liquid salt is pumped to a heat exchanger system that produces superheated steam for the turbine generator. The salt cools as it transfers its heat energy to the water and is returned back to the cold storage tank to be reheated again by the solar thermal receiver.

This liquid salt solar concentrator design allows for electrical power to be generated even when the sun is not shining. However, one major disadvantage of using molten salt is that the salt must be kept in a liquid state in the system at all times even during standby or when there is no solar radiation in order to prevent it from solidifying and blocking the pipes or the actual solar receiver at the top of the tower.

Solar Power Towers have many advantages over other forms of concentrating solar collectors for use in a solar electricity generating system or SEGS. They are a non-polluting, zero emissions (except for the scattered sunlight) solar power plant that is able to continually generate electricity for long periods of time as long as they have a means of storing the free heat energy which comes from the sun. One such storage medium used on modern solar tower installations is molten salt.

Although at present solar towers produce electricity that costs more than electrical power made with fossil fuels due mainly to it being a relatively new technology, solar towers have the potential to achieve higher efficiencies, up to 20% and can be easily expanded by the addition of more heliostats more than many other solar concentrating technologies, thereby reducing costs and providing reliable power for its customers over a long period of time.

However, there are many drawbacks to solar power towers as well. Solar towers and their surrounding heliostats take up a lot of land and are usually located in the remote desert locations with high sun exposure or situated on empty spaces of land requiring new access, roads and electricity pylons to connect the solar generating station to the national utility grid. Also, the size, height and scattered solar reflection from the tower and surrounding heliostat field may have a negative impact on the local environment and wildlife.

But despite the fact that solar tower power plants are big and use up a lot of land, they still use a lot less space than hydroelectric dams which requires a large lake behind the dam or a conventional coal fired power station which requires large areas of land for storing and processing of the coal. Ultimately, the overall size of solar power tower generating plant is generally limited by the maximum distance from the tower to the last row of heliostats.

In the next tutorial about Solar Thermal Energy we will look at how we can use solar thermal energy and solar collectors to heat water as part of a Solar Pool Heating system allowing a normal backyard swimming pool to be used throughout the year.