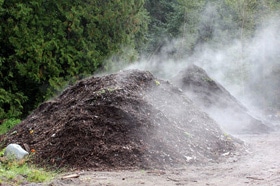 Anaerobic Composting – Let the Bugs do the Work

Micro-organisms in the compost heap, called Aerobes need oxygen to help them grow, multiply and decompose the waster materials. But when there is insufficient oxygen available inside the compost pile, these aerobic micro-organisms cannot survive and eventually die. As theses aerobes die off, another type of bacterial micro-organism called Anaerobes take over the job of decomposition producing anaerobic compost.

Then anaerobic composting process is the slow bio conversion of organic matter in the absence of oxygen using fermentation, and is similar to the fermentation processes which occur naturally in bogs, swamps, marshes and other such wetlands that produce peat compost and moss. 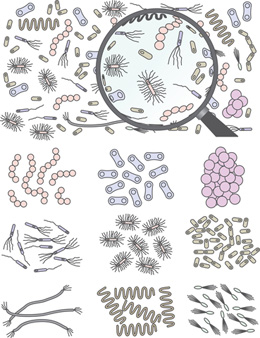 Anaerobic Composting works best with nitrogen-rich materials as they are mainly wet, but almost any organic material can be processed in an anaerobic composter such as waste paper and cardboard, grass cuttings, left over food, animal slurries and manure, etc, or any other type of feedstock that has a particularly high water content.

But it is important to avoid adding too much carbon rich materials such as dry leaves, sawdust and woody garden waste. A high concentration of these types of dry materials will retard or even halt the anaerobic composting process either killing of the anaerobic microbes completely producing a smelly mess or turn it into an aerobic composting pile.

Unlike conventional aerobic composting, anaerobic composting is a low temperature process so the compost pile will not heat up due to the high percentage of liquid. So any pathogens, diseases or weed seeds present within the mixture may not be killed in the fermentation process. However, the pathogens will gradually disappear over time due to the hostile environment.

Since the biological process of anaerobic composting happens naturally in the absence of oxygen, it is effectively a controlled and sealed version of the anaerobic breakdown of organic waste which occurs naturally in landfill sites. The wet biomass feedstock is sealed in containers allowing the anaerobic bacterial microbes to thrive in an oxygen free environment as liquid composting.

The anaerobic digestion of the feedstock happens naturally over time, producing a useful biogas, usually methane, that can be collected and used to generate electricity or heat. However, over-exposure to oxygen impedes the anaerobic micro-organisms from multiplying and slows down efficient composting.

How does Anaerobic Composting Work

Anaerobic Composting needs to take place in a warmed, sealed airless container, called the digester, which creates the ideal conditions for the bacteria to grow and ferment the organic material in the oxygen free conditions. We have seen that grass cutting left in a plastic bag in the garden will begin to decompose anaerobically very quickly, creating a slimy mass emitting strong odours, this is “anaerobic composting”. The “anaerobic digester” used for composting can be any type of air-tight container, barrel or bucket with a lid, or as simple as a plastic bag. There are basically two types of anaerobic digesters: Dry Digesters and Wet Digesters.

Dry Anaerobic Digesters as its name suggests, uses no additional water or liquids to promote the biological process. The compostable materials that contain sufficient water content such as cut grass, fleshy plants and stems, or food waste are finely chopped and shredded, sealed in the their respective air tight containers and left for several weeks or months to naturally decompose.

The decomposition time of the solid waste feedstock as well as the quantity of biogas produced is considerably affected by the type of waste materials used and the external temperature during fermentation. When selecting solid wastes for dry anaerobic digestion, the carbon to nitrogen ratio, C/N ratio and the biodegradability of the feedstock materials have to be carefully considered.

The anaerobic de-composting occurs underground and doesn’t produce compost to spread around the garden, but will improve the soil in that spot. Also with pit composting, there are no sightly compost heaps, containers or fermentation barrels visible above ground. Another advantage of this type of anaerobic composting is that the pit or trench can be dug around the roots of trees, bushes and other such larger garden plants improving their soil conditions to help develop stronger roots.

As anaerobic organisms decompose the solid waste at a slower rate than their aerobic counterparts, sometimes it can be difficult to monitor their progress without digging out the pit or opening the containers to look allowing oxygen to enter. However, once complete, the dry anaerobic compost should be odour free with little or no liquid effluent produced. Also anaerobically digested manures retain most of their nutrient and fertiliser value which is good for the growing plants.

Wet Anaerobic Digesters on the other hand use animal and poultry manures, slurries, effluent’s and green organic materials mixed with water as a form of liquid composting. The water content of the liquid feedstock is very high at more than 80% of the volume. Wet Anaerobic Composting converts liquid organic waste into a rich source of renewable energy in the form of “Biogas”. This biogas contains methane and carbon dioxide which can be used for energy generation directly, as well as a stable semi-solid digested material called the “digestate”.

This digestate can be separated into a liquid compost, affectionately called “compost tea” which can be used as a liquid fertiliser high in water soluble nutrients and a nutrient rich solid fraction as a soil conditioner. Liquid composting and liquid anaerobic fertilisers can be cheaply made at home by using a standard watering can as a wet anaerobic digester.

Another method of creating anaerobic compost involves keeping the compost submerged under water. This method does not have to be sealed against the ingress of oxygen but a large tank, plastic pool or a shallow pit is required to hold the compost which is then filled with water. As the compost decomposes, the odours are trapped in the water. This form of passive composting takes a lot longer to complete as the water temperature is generally cold and the micro-organisms do not have as high a metabolism.

One of the main disadvantages of wet anaerobic composting by the direct use of animal manures and sludge’s, is the risk of plant and human contamination by pathogens such as ecoli and salmonella. Heating of the liquids and/or solids produced above 55oC would destroy these pathogens but an additional energy resource is required to do this.

Anaerobic compost generally contains higher levels of ammonium, since anaerobic microbes tend to use less nitrogen than aerobic microbes. The process of composting anaerobically produces a biogas (e.g. methane and carbon dioxide), bi-product which can be captured and used as an alternative energy or fuel.

Since Anaerobic Composting occurs in a sealed oxygen free environment or underwater, decomposition of the organic materials can lead to very unpleasant odours due to the release of sulphur containing compounds such as hydrogen sulphide, but these slight sulphur odours can indicate that the decomposition process is working properly.

One of the main disadvantages of anaerobic composting is that if the compost is not allowed adequate time (at least one year) to ferment and breakdown the biomass feedstock, there is a risk that the compost will contain harmful pathogens because there is not enough heat generated in an anaerobic pile and the decomposition process relies only on the microbes. Given enough time to breakdown the feedstock, any pathogens that may have been present will eventually be out competed by more beneficial micro-organisms.

In the next tutorial about “Composting” we will look at another common way of decomposing your garden wastes materials using worms in containers. Worm compost or Vermicomposting as it is more commonly known, is a fun and useful way to produce garden fertilizer by using a special type of red worm that like to consume organic waste.

To learn more about how “Anaerobic Composting” works, to obtain more information about the various composting methods and materials available, or to explore the advantages and disadvantages of anaerobic composting, then Click Here today to get your copy of one of the top “Composting Guides” from Amazon and learn more about the different ways to produce good quality compost in your garden to save money and the environment.