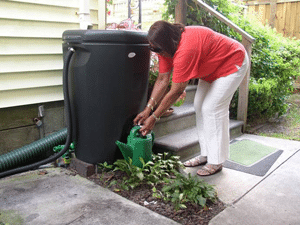 Small scale hydro power schemes exploit water as a renewable resource and are characterised by their use of local, small hydropower plants installed on small rivers and pipelines so do not require the expensive construction of dams or reservoirs also making them environmentally friendly. Low-cost small scale hydro power plants generate electrical energy for one or more housholds from a single stream. Due to their simple construction and low head pressure, small scale hydro installations tend to use Turgo turbine designs.

Efficiency is a critical consideration in the design of hydro turbines so they range from one’s which use curved or flat blades to some which are shaped like small buckets. A hydraulic turbine is the main component of any hydropower system so choosing the right turbine for the job is important. Power generation from hydraulic turbines depends on the availablity of water head, penstock design, water velocity and the number of jet nozzles directing water to the water turbines blades or buckets. Typical water turbine designs have names of Pelton, Francis and Kaplan turbines after their designers.

Waterwheel designs use shaped buckets or blades transfer the kinetic energy of flowing water into a rotary movement of a shaft. Waterwheel deigns include overshot, breastshot and undershot designs use the gravitational effect of water pushing against the buckets or blades in different ways. Many factors influence the performance of each waterwheel design including are the number of buckets, wheel diameter and width, bucket shape and rotational speed. 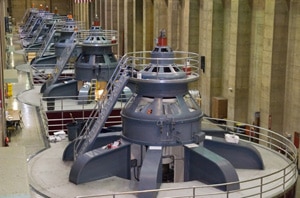 Hydro energy generation uses the gravational movement of water using conventional hydro, run-of-river, or pump-storage systems to funnel the water through hydro turbines in order to generate electrical power. Hydro energy ranges from large scale hydropower facilities using dams, reservoirs and storage, to small scale run-of-river projects in streams and rivers making it one of the most mature renewable technologies for electricity generation around the world. Hydro energy is the sustainable and safe exploitation of water with the different types of turbines defining the system.