Geothermal Heat Pumps that Harness the Energy of the Earth

One of the major disadvantages of using heat pumps for the heating or cooling of buildings is that they exchange heat with the atmospheric air around them. This atmospheric temperature varies with changes in the seasons reaching hot and cold extremes during a year. So if another heat source with an almost constant temperature was available, were heat could be absorbed during the colder seasons and dissipated during the hotter seasons, the refrigeration cycle used for the heating and cooling of our buildings would be more efficient throughout the year as it would not be affected by seasonal temperature extremes. 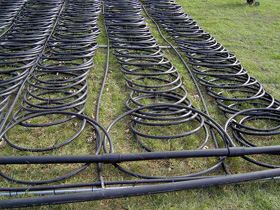 A geothermal heat pump (GHP) or ground source heat pump (GSHP) is a central heating and/or cooling system which works like a refrigerator but in reverse by extracting thermal energy from one area and dissipating it in another area. Geothermal heat pumps utilizes a heating and refrigeration cycle with the ground being used as the medium to dissipate heat from its condenser during the summer (heat sink) as well as to absorb heat by using its evaporator during the winter months (heat source).

A Geothermal heat pump uses long plastic (polypropylene) spiral piping system as shown in the image, of diameter between 20mm to 75mm (3/4″ to 3″) and over 80 metres (approx. 250′) long buried horizontally in the ground. A water pump circulates a thermal carrier liquid, usually water with a mixture of brine salt or antifreeze, through these closed loop pipes which carries the cooling or heating fluid, known commonly as the “refrigerant”. This heat absorbing fluid goes through a cycle of condensing (taking heat) and evaporating (giving heat) that moves heat between the pipes and a heat exchanger.