Geothermal Water is More Than Just Pumps and Pipes

Geothermal Energy is a fantastic energy source providing significant benefits to public health as well as to the environment because it is one of the least polluting and most environmentally friendly forms of energy around. We all know from our school science classes that Mother Earth has plenty of heat beneath its surface. We also know that we can convert this heat into usable electrical energy or hot water and it is this sustainable renewable energy approach that helps us to generate power using this geothermal resource.

The Earth contains a lot of energy in the form of heat. The amount of heat stored as geothermal energy within the Earth is so huge that humans could not possibly use it all up, not even in a million years, making it a truly renewable energy resource. It is this extreme heat of the Earth’s core which permeates through most of the interior of our planet that geothermal energy systems tap directly into providing an unlimited source of energy for heating our homes and our water. 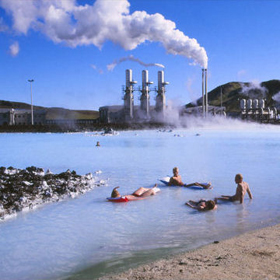 The geothermal heating of buildings and water is a process that has been used since Roman times. It is a way of heating buildings by utilising sources of hot water that already exist near the Earth’s surface. In places where Geothermal resources are available it is possible to distribute hot water to multiple buildings and locations.

Geothermically heated waters have been used for thousands of years, and maybe longer. There was a revival of heated bathing culture back in the mid-to-late 19th century that saw the creation of countless “healing water” baths and spas all advertising various spa therapies to cure numerous health related issues.

Today, the “Blue Lagoon” in Iceland is one of the most popular geothermal water spa’s around the world and an exciting place to swim all year round. This geothermal spa is like one huge natural outdoor swimming pool holding up to five million litres of pure geothermal seawater with temperatures ranging from between 95 to 98 degrees F. As well as being hot, the volcanically heated seawater is rich in natural minerals, including sulphur and silica and has helped many people with all kinds of skin conditions.