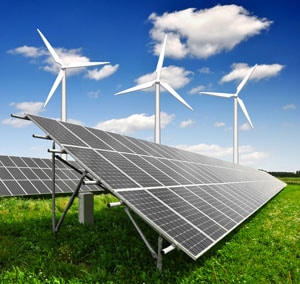 Renewable Energy uses energy resources and technologies that are “clean” or “green” because they produce few if any pollutants. Many people use the terms “Alternative Energy”, “Renewable Energy” and even “Green Energy” together in the same sentence when taking about energy sources as though they all mean the same thing, but they are not the same. Each term means something different when talking about energy systems. So what does renewable energy mean. 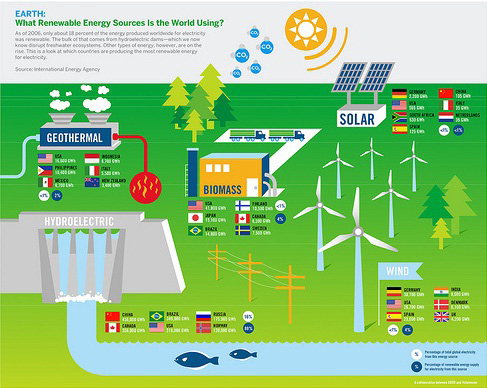 Renewable Energy on the other hand uses renewable energy sources that are continually replenished by Mother nature producing a usable energy that can not be used up faster that it is consumed. These energy sources created mainly by the Sun shinning on the Earth are converted into different forms, such as: solar radiation to wind or water based energy which is distributed over the Earth and atmosphere, the Earth’s geothermal heat, and plants in the form of biomass. Renewable energy technologies turn these fuels into usable forms of energy, most often electricity, but also heat, chemicals, or mechanical power. So what are renewable resources.

This is the original renewable energy source as the sun gives us heat and light. There are two types of solar energy: “Passive” and “Active”. The first simply involves making use of the position, intensity and duration of the suns rays throughout the day to best advantage, using it to heat our homes or induce an air flow by convection from one room to another, without the use of extra technology beyond what is needed to store the energy.

The second type involves using mechanical and electrical technology such as photovoltaic solar panels or solar thermal panels to capture, convert and store the suns energy either in batteries or hot water tanks for later use. Active solar hot water systems use pumps to move the heated water around. There are many types of solar power and renewable energy systems available for harnessing the suns power in the home.

The force of the wind has been used as a renewable energy source for many hundreds of years to power sailing ships that sail the oceans and windmills that grind the corn. These days however, wind power involves not one or two windmills dedicated to grinding wheat and flour, but many wind turbines arranged to capture large amount of power at once converting it into electricity and feeding it into the utility grid. Thus windmills transform wind energy into electricity.

These large wind turbines are amassed together on a hill side or offshore in the sea to exploit the kinetic energy of the wind. These vast collections of wind turbines together are known as “wind farms” and are becoming an increasingly common part of the countryside. Wind energy is a clean and renewable technology that does not release pollutants, emissions or by-products into the atmosphere during operation since there are no chemical processes involved in its electrical generation.

Hydro Energy is another renewable energy resource in which the energy is derived from the power of moving water. The energy from the Sun heats large masses of water such as the sea, oceans and lakes, turning it into water vapour which rises forming clouds high in the sky. The cold air above the clouds condenses this water vapour which then falls back to Earth as rain or snow in the hills and mountains. Then hydro energy uses renewable energy sources.

Hydro Energy is a clean, green technology which produces no pollution and part of the beauty of hydro energy lies in its simplicity. Rivers and streams generate currents of water because the water in them is moving downhill, even if only slightly, flowing downwards by the pull of gravity. This water contains large amounts of kinetic energy that can be extracted and used to spin a turbine or waterwheel (mechanical energy), which drives a generator (electrical energy). Even a small stream can produce enough kinetic energy to turn a wheel.

Biomass as a Renewable Energy Source

Biomass and Bioenergy are the terms used for any kind of non-fossil fuel material that is classified as being organic, biological or made of plant matter, and which can be converted into a usable energy source. Biomass is considered to be a vital resource that we can use on the Earth to the point of being called a “Bio-renewable Resource”.

Biomass energy production involves converting biological material or wastes into substances that can be used as fuel for heating, transportation or power generation.

But biomass also has its disadvantages, biomass is only renewable as long as it is not consumed faster than it can be replaced, solid biomass fuels have a much lower energy content than fossil fuels, fossil fuels are consumed to produce bioenergy fuels and large amounts of land are required to grow the trees and crops decreasing the amount of land available for agriculture and food production. “Biomass” and “Bioenergy” are available in the there basic forms of a solid, a liquid or a gas.

The planets oceans and seas offer many promising sources of power and all renewable energy sources at that. Tidal power involves capturing the kinetic energy of the incoming and outgoing tides, as well as capturing the potential energy trapped in the local differences between high tide and low tide. Tides are caused by the gravitational forces of the moon and the sun, which vary throughout the year due to their elliptical orbits and thus cause the oceans to rise and fall in a continuous and predictable cycle. This rise and fall of the oceans water results in coastal areas having two high tides and two low tides within slightly more than 24 hours. Then we can use tides as an alternative energy source.

Renewable Energy Sources are about sustainability, they are a clean, inexhaustible and locally available energy source that maintains a balance between the energy being consumed and the new potential energy sources being created allowing for local energy independence.