The Efficiency of Biomass Energy

Over the recent years, interest in, and the use of, renewable energy has been growing fast due mainly to the serious problems associated with fossil fuel usage, such as their rapid depletion, effects on global warming and the environmental damage that their combustion creates. Many of the sources we class today as renewable energies, such as biomass, hydro power and wind power, have been used by humans for thousands of years and long before the fossil fuel era ever began.

We all know that fossil fuels such as coal, petroleum oil and natural gas have been, and still are, our major primary sources of energy as they supply over 80% of the worlds energy needs. But as the worlds population grows it is expected that our total energy consumption will significantly increase in the future so new and alternative energy sources are being developed.

Compared to traditional fossil fuels, renewable energy sources have many advantages and it is widely acknowledged that existing fossil fuel supplies should be replaced by alternative and renewable energy resources such as biomass, wind, solar and geothermal. 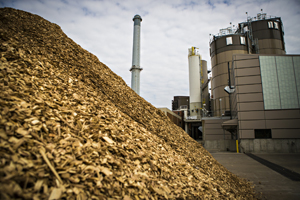 Most of these renewable energy sources originate directly or indirectly as a result of the solar radiation received from the sun. Also unlike fossil fuels, the sun’s solar radiation is distributed more uniformly and evenly around the Earth, plus their use has a lower environmental impact due mainly to the reduction of atmospheric CO2 emissions.

Today, biomass, geothermal and hydro power are the three most widely used renewable energy sources with regards to their respective future potential with direct solar power and ocean energy showing the lowest ratio between current and potential use.

Renewable energy sources can therefore significantly supply the future global energy needs with Biomass dominating the current renewable energy usage being the world’s fourth largest energy resource, after oil, gas and coal. While biomass crops have mainly been associated with traditional forms of use, such as cooking or as a heating fuel, in recent years biomass has been increasingly used and developed to produce modern forms of energy such as biofuels for transport, pellets for electricity generation, plus a wide diversity of bio-chemicals and bio-materials.

Biomass has always been and will continue to be used for food and animal feed purposes as well as a source of energy production. Biomass by definition is a living and organic material that is produced by plants (algae, crops and trees) by the process of photosynthesis and one of the main advantages and features of biomass is its renewability and neutral CO2 impact as the fundamental mechanism of photosynthesis involves only renewable resources: sunlight, carbon dioxide, and water.

The efficiency of biomass energy depends on how they can be converted into power, heat, fuel, and chemicals using a variety of thermochemical and biochemical methods. Biomass energy crops can be used to produce almost all of our commonly used energy carriers, and the large variety of biomass feedstocks and conversion methods makes biomass a versatile fuel.

Being a natural product created by Mother Nature, the efficiency of biomass production by photosynthesis is very low compared to other renewable sources, for example, photovoltaics. But biomass feedstocks are very diverse and originate from many different sources and as such are classified in a variety of different ways. Biomass feedstocks can therefore be classified as either virgin crops, that is naturally grown dry land crops and water based algae and aquatic crops, or waste biomass such as by-products and residues created from biomass processing.

Modern biomass usage such as the production of first-generation biofuels (ethanol and biodiesel) as well as the generation of power and heat using compressed pellets and the co-firing of biomass and coal has been accompanied by several drawbacks, such as limitation of land usage and water in competition with food production. However, one way of improving the efficiency of biomass energy is to use waste biomass from food, organic waste, animal waste, agricultural waste and production wastes as an alternative feedstock for energy production.

The living and organic part of biomass such as carbon, oxygen and hydrogen is present in a wide variety of plants, wood, and crop species and supplies the energy for all chemical and biochemical conversion processes. The efficiency of biomass energy depends on its energy content being either having a low heating value, (LHV) or a high heating value, (HHV) in which for most biomass feedstocks, a dry feedstock would have a high heating value, whereas the lower values would correspond to aquatic and wet waste biomass.

Biomass as a renewable energy source has many positive environmental impacts such as the reduction of harmful greenhouse gas (GHG) emissions, less environmental pollution, and the saving of depletable fossil energy. Biomass is completely carbon neutral as the carbon dioxide generated from the end use of its bioenergy, mainly combustion, is returned back to the biomass crops by photosynthesis. However, the transportation of biomass feedstocks by trucks, trains or ships requires the combustion of fossil fuels. Also during the biomass conversion process, additional fossil energy may be used as heat or electricity reducing the efficiency of biomass energy.

An accurate comparison between the costs and efficiency of bioenergy compared to conventional fossil energy is somewhat difficult as the biomass feedstocks, conversion processes and technologies are very different and diverse and therefore have very different costs and benefits. It is generally recognised that currently made bioenergy products are still more expensive than the equivalent fossil based ones. However, some large production based biofuels, such as sugar cane ethanol, and the electricity and heat generated from waste biomass products are already becoming competitive with fossil energy as production costs decline.

Energy efficient biochemical conversion methods which use various enzymes and micro-organisms, such as bacteria and yeasts, for partial decomposition and the efficient conversion of sugars into ethanol, the production of methane or hydrogen-rich biogas by fermentation or digestion or the conversion of biomass feedstocks into other types of useful chemical compounds and materials are currently being developed.

Today, the availability and diversity of biomass feedstocks and their different conversion methods make biomass a versatile fuel. Biomass based feedstocks can be used to produce almost any type of energy carrier, not only the more traditional ones for heat and electricity but also a growing number of modern transportation fuels and chemicals. The efficiency of biomass energy will play an important role in the future energy pattern as second-generation transportation fuels such as methanol, ethanol and biodiesel become easier and cheaper to produce.

We have seen here that biomass is a sustainable energy source that can easily replace the use of conventionally used fossil fuels while at the same time offering several positive environmental advantages. The efficiency of biomass energy into power, heat, transport fuels, and chemicals depends largely on the various thermochemical and biochemical methods used for its conversion.

The key features associated with biomass efficiency are its renewability and neutral CO2 impact. Moreover, biomass is the only truly renewable carbon source that provides energy storage unlike other sustainable energy forms, such as solar or wind who’s energy is produced at the time and needs to be stored in batteries.

Technological improvements and development has always been the driving force in the history of mankind. The main historical changes that have helped us improve our quality of life has been the use of tools, the agricultural revolution, and the industrial revolution. Today the Renewable Energy revolution is under way with a variety of sources such as solar, wind, hydro, geothermal and biomass energy being developed. The key challenge is to develop energy efficient conversion processes and technologies that can compete with our use of fossil fuels and non are more important than those which deal with the efficiency of biomass energy.