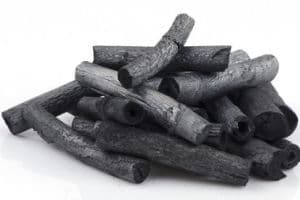 Biochar Energy as a Soil Enhancement

Biochar is a charcoal-like substance designed to improve or enhance the quality of soil as a growing medium or peat substitute. Biochar is a portmanteau of the words BIO-mass CHAR-coal.

We have all heard of charcoal, activated charcoal and even coking coke, as we use it regularly on our barbecues for cooking, or our stoves for heating, as well as numerous other applications from black-smithing to steam powered transport. Either way, mother nature has provided us with many different types of mineral coal to produce a variety of carbon-based products using the same basic coal-forming processes.

Biochar material is similar in look and texture to charcoal we all know and use but instead of being a non-renewable fossil fuel, biochar is produced from burning organic and woody biomass materials in a sealed furnace or oven in the absence of oxygen.

This type of oxygenless combustion process is commonly called Pyrolysis. Thus biochar pyrolysis is a thermo-chemical type of heat treatment that can be applied to any type of organic product for the conversion of biomass into energy, producing a carbon-rich solid black material called “Biochar”.

Since charcoal is mainly carbon, when it is burnt on an open fire, it releases alot of carbon dioxide (CO2) and which is a potent greenhouse gas into the atmosphere. Instead of burning it as a fuel, this carbon-based material can be crushed into a powder and mixed into the soil as a way to sequester carbon in the ground while improve soil, rather than releasing it into the atmosphere as a greenhouse gas. However, the conversion of wood fuels into charcoal briquettes requires deforestation of the wood based material which has effects on the climate and local eco-systems.

Biomass is the biodegradable part of crops, waste and residues from biological origin and is considered to be the important source of renewable energy. Biochar produced from biomass pyrolysis in a low-oxygen process does not burn and combust but instead thermally decomposes into a combustible solid. There is no one single type of “biochar material” as it can be produced from either pure biomass products or different feedstock mixtures depending on what is available. Production conditions such as variations in pyrolysis temperatures ranging from 350oC to 1000oC and time have an effect on the final product.

Removing carbon dioxide (CO2) and other such greenhouse gas emissions from the atmosphere and storing it in the ground benefits the soil quality by helping to improve the pH and physical and chemical structure of the soil restoring degraded soil into fertile land. When compared to other forms of peat and natural based fertilisers available in garden centres and DIY outlets, biochar is a safer product to use because during the high temperature pyrolysis process, the feedstock material becomes disinfected. Thus biochar technology produces clean energy from living plants, removing carbon from the atmosphere and storing it in the soil.

Biochar is stable, solid, rich in carbon, and can can be used in the soil for many years as a soil amendment and fertiliser. Biochar can be made from almost any organic material but the type of energy crops and residues used to create biochar plays an important role in the type of biochar produced with regards to it being a quality and efficient product. Different types of biomass feedstocks for conversion into biochar will have varying degrees of potential and effects to either sequester carbon in the soil, or to improve the productivity of crop yields.

For example, biochar which is produced from high carbon based feedstocks, such as wood or solid waste requiring Pyrolysis at higher temperatures, are suited more to in-ground carbon sequestration. Whereas biochar obtained from animal manures, food or green wastes which have a high nutrient content, are better suited to increased crop productivity.

Biochar as a carbonised plant material has a great potential to improve the physical structure and health of the soil as a fertiliser as well as mitigating climate change by reducing atmospheric carbon through carbon sequestration, thereby reducing the effects of greenhouse gas emissions. Spreading biochar as solid chunks or as a ground powder uniformly over your soil and digging it in will increase its density ensuring the proper distribution of biochar deep into soil.

But we must also consider the downsides to biochar production in that adding biochar to our soil does not lead to any long-term toxicity, soil fertility or structure issues. Secondly how much carbon can be sequestered into the soil using biochar, and is there a limit to the amount and type of biochar we can mix into our soil and does it react with particular soil types. Is old or aged biochar just as effective compared to fresh biochar. Replacing food crops with biomass feedstock for biochar pyrolysis is another mounting concern.

However, our knowledge about the production and effects of biochar as a soil enhancement (biochar-to-soil) and carbon sequestration product is increasing all the time, and as we better our understanding of biochar’s various properties, types and its interaction with the soil as well as the organisms within the soil, we can begin to understand the use of biochar across a wider range of applications from biofuels, pyrolysis oils to producing clean energy resources as a result of biochar production.