Solar Still is Clean Water from the Sun

Clean fresh water is not only important for the existence of life, but it is also important for cooking and the growth of food crops, as well as for the environment as a whole. The lack of clean drinking water in some parts of the world can lead to illness, diseases, poverty, and even war. Solar distillation is a simple and practical way of producing liters, if not gallons of fresh solar still water for both drinking and watering the garden.

A Solar Still comes in many shapes, sizes and designs, from simple plastic boxes in the garden to massive desalination plants next to the sea. The water quantity they produce will of course vary according to the type of the solar still, but they all produce the same results, potable water that is fresh, clean, and safe to drink. We know that water butts and barrels can be used for the collecting and storage of rainwater for use either in the home or in the garden, but if the rainwater is intended for human consumption (potable) it needs to be screened, settled, filtered, and disinfected first.

Solar energy is renewable energy source available all over the world that never runs out. The sun’s solar thermal energy is free, clean, available all year around, and unlimited, so why not make use of it to produce clean water as solar still water distillation systems are among the simplest water purification system you can build.

For many people who live “off-grid”, using solar panels, wind turbines and/or battery storage to power their daily lives is a normal way of life.

But for those who live in remote dry and arid areas that don’t have a nearby stream, running water, or are far from a local store to buy clean or distilled water, this can be a big problem, especially if you need water for your car or to top-up your renewable energy storage batteries. Luckily “solar still water” could be the answer to all these problems.

A passive solar still is an environmentally friendly water treatment process which can have a wider use than just producing clean drinking water.

Solar distillation is a simple process where the sun’s thermal heat is added to water to evaporate it, producing a vapor before being condensed back to a clean liquid. Then basically a solar still replicates the Earth’s natural water cycle of: evaporation, condensation, and precipitation.

The solar still water distillation process is exactly the same as Mother Nature’s method who produces vast quantities of fresh clean water by transforming water vapour from oceans and lakes into clouds. Chances are that the water you consume everyday has already been solar distilled a few thousand times using mother Nature’s hydrologic cycle processes.

Passive solar stills are simple solar boxes (the still) made from wood, metal, or plastic, which have a transparent cover, usually glass, to allow the solar radiation to shine through warming the watery liquid below which is to be distilled. In many ways, a solar still copies the Earth’s greenhouse warming affect by trapping the thermal energy from the Sun inside the box and using it to power the distillation process. The advantages of a passive solar still is that they do not require any special filters or membranes to operate, have no moving parts, and best of all no electricity is needed for the distillation process.

It is also possible to make a very basic solar still water system by simply digging a large enough hole, covering it with a plastic sheet and letting the sun do the rest. But to produce a few gallons or liters per day with a reasonable amount of success, you require a still that is designed for the job of distilling water. There are many commercially available solar stills available on the market or internet as well as solar still DIY plans available to build and make your own with just a few basic tools, building materials, a sheet of glass and some sunshine.

The basic design of a passive solar still is the same whether you purchase a commercially built, “ready-to-go” unit or use solar still DIY plans. The of air tight pan or basin that holds the dirty (grey) water with a slopping sheet of glass or plastic on top. The bottom and sides of the still can be insulated or painted black to help absorb the solar radiation and increase efficiency. The grey dirty water is held in the bottom of the still where it is heated by the sun as shown.

Here in this simple solar still design, the transparent glass (or plastic) cover allows the sunlight to enter the still warming the dirty water below in the basin or pan. This warming of the water causes it to evaporate trapping inside the still as water vapour. This hot, moisture-laden air rises up to the slanting glass sheet and then condenses on the underside of the glass (which is cooled by the outside ambient air) leaving the dirty salts, minerals and contaminants behind in the pan.

As the transparent glass (or plastic) cover is tilted at a gently angle of about 10 to 20 degrees, the condensed water droplets that form on the underside of the glass cover collect together forming larger water droplets which get heavier as they grow and roll down the sloped glass cover into a collector tube or trough at the bottom to drain away the distillate.

The clean and condensed distilled water can be collected into a clean container for storage, thus producing perfectly clean water for a range of uses as the dirt and contaminants are left behind in the still, which should be flushed and clean regularly.

Then the production of drinkable solar still water from the natural process of solar distillation that uses the sun’s free and abundant solar thermal energy to heat and evaporate water in a natural way by mimicking the Earth’s hydrologic cycle to produce a continuous cycle of heating and cooling.

DIY solar stills can be made to any shape, size or design to suit the area or location to where they will be used. They can be mounted on roofs or as “on-ground” structures at the location of choice. Insulated pans and basins help reduce heat loss, while thin glass increases efficiency as the thinner the glass, the better. This is because thin glass stays cooler on the inner surface as it is less insulating so helps to condense the water faster when the glass is cool. Thus producing a continuous cycle of heating and cooling.

It also makes sense to keep the slope of the transparent glass or plastic top at a shallow angle, around 10o or so as a greater slope increases the volume of air inside the still. Too little a glass slope makes it more difficult for the condensed water to run down the glass under the influence of gravity. The condensed water droplets just accumulate together and drip back into the basin below. Another advantage of a lower slopped glass top just a few inches above the water is that the closer the glass is to the waters surface, and therefore the less air space inside the still, the more efficient it will be.

The process of water distillation can be slow, especially on dull winter days. But one way to increase the efficiency and therefore the yield of the clean water output of a still is to use a reflector to increase the amount of insolation hitting the inside basin of the still. Since it is the heat of the sun driving it, using a reflector during the day will increase the temperature inside the sealed box making the process of solar distillation work much more quickly and with minimal effort. 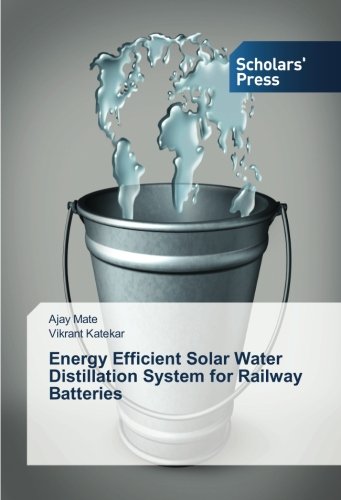 Some advantages of a passive solar still is that they do not use or consume any additional energy for them to work and their operation, in most part, is semi-automatic producing purified clean water at no extra cost and with minimal effort.

Also, distilled clean water produced by a passive, or active, solar still is generally drinkable as the quality of the water produces is generally high because all the salts, minerals, microbes and unwanted organic components are left behind in the pan or basin.

This clean drinking water may taste a little strange at first, since the distilled water does not contain any of the minerals or chlorides that people are accustomed to when drinking tap water, but the still water is perfectly healthy.

Also, using the sun’s energy to drive the process means that the temperature of the water in the lower basin can rise sufficiently to kill various pathogens and bacteria within the water as well as the UV radiation of the sunlight can kill a reasonable amount of the bacteria after some hours of exposure.

The distilled water produced by a passive solar still is not just for drinking, there are many different applications for the home, garden and garage, so its worth having a few liters or gallons of it around. Clean water free of chemicals, minerals and contaminants has a number of valuable uses such as:

Freshwater production using solar stills to purify your water has many advantages and uses. Off-grid homesteaders can power their homes or cabins with solar photovoltaic panels, wind turbines, or hydro energy turbines, but with a “solar still” they can be fully independent, because as we have seen, a solar still’s can turn dirty water into pure water for a host of different uses including for emergencies and survival. After all, we use the sun’s free solar energy to pump water, why not use it to purify the water.

We have seen in this tutorial about producing Solar Still Water, that we can use a simple device called a passive solar still to convert dirty, salty or polluted water into clean distilled water by means of solar energy. Solar distillation has been around for centuries as a way of evaporating sea water to produce clean potable water, and there are many large still and desalination plants around the world.

Whether you live in a remote dry area, have no running water, or you just don’t trust the drinking water that comes out of the tap or faucet, solar stills can provide safe, healthy drinking water at minimal cost and effort. Building your own still is not that difficult and there are many solar still water diy plans available to choose from.

With just a few basic tools, building materials, a glass sheet and some sunshine, you can purify your own water at zero cost and with minimal effort. Providing you have a sufficient amount of sunshine available at your location all year around, you can easily produce the quantities of distilled water you need for you, your family, and your storage batteries. 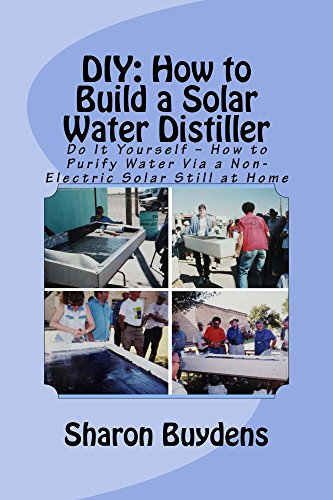 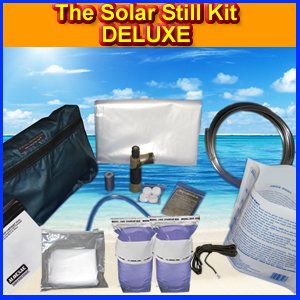 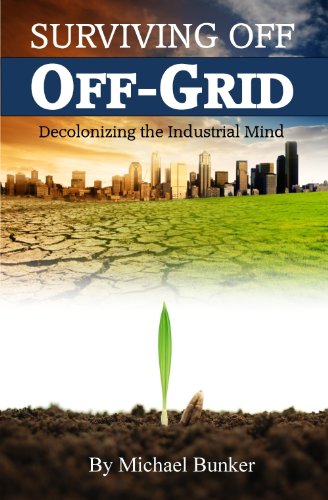 Surviving Off Off-Grid
$4.99
Shop at Amazon

We hope this Solar Still Water tutorial was useful and informative for you. Are you ready to share your thoughts
and experience with us and many others. Your comments are always welcome, just post them in the section below.