Hydro Energy is a renewable energy resource that uses the movement of water to rotate a water turbine or waterwheel which in turn produces a rotational mechanical output. The potential energy of the moving water is released as work because the water is in motion and the best way to put large amounts of water in motion is to let gravity do the work.

Then the most important element for the production of “Hydro Energy” is not the water itself, but gravity, as it is gravity that makes the water move. Then we can correctly say that hydro energy is gravity powered energy as we are generating electricity from gravity. 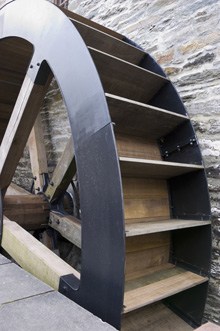 Hydro Energy is actually one of the most common kinds of renewable energy technology in use today, and with good reason. This kind of alternative energy, in addition to being sustainable, renewable, cost-effective, and environment-friendly, also has the potential for one day effectively producing most of the worlds energy needs.

Today, large scale hydro energy in the form of dams and reservoirs supply about 15% of the world’s electricity needs, with some countries such as New Zealand producing over 70% of its electrical energy just from hydro power stations.

The theory of hydro energy is very similar to that of wind energy but instead of using the wind to rotate the turbines blades, we use the constant flow of water. Previously water turbines had only been used for the pumping of water or for the irrigation of land, but due to technological changes over the last few decades, we can now use water turbines to generate electricity not only on a large industrial scale but at home in the form of small scale hydro power systems.

The moving water rotates a water turbine or water wheel thus converting the kinetic energy of the movement of the water into a usable mechanical energy. This is then turned into electrical energy through the use of a generator.

The amount of electricity generated is determined by how far the water falls, called “head height” and the average volume of water flow. These “run-of-river” small scale hydro power plants can be very efficient and very simple to install if there is running water near your home.

For most people it is highly unlikely that they will have a small stream or river big enough to provide a good enough source of water flowing through their land which could be used to power even a small scale hydro power system. But if you happen to be one of the very lucky few who have a reasonable size stream running past your garden or land then a small scale hydro power system may be for you as building even a small dam and adding an electrical generator in a reasonable river can provide a good amount of energy for your home.

In most cases, the natural gravitational flow of the water is more than enough to generate a good supply of electricity for the home but in other cases, a funnelling of the water along pipes, troughs, canals and/or penstocks may be required to increase the waters speed and therefore its potential energy output.

Hydro energy has one big advantage over other renewable energy sources you may be considering to power your home. The main advantage is that a small scale hydro system can generate power 24 hours a day, 7 days a week unlike other forms of solar power such as wind turbines or photovoltaic panels as the wind does not always blow or the sun does not always shine. But as long as there is gravity, the water will always keep on flowing flow down a stream or river both day and night and the faster the water is flowing, the more free energy that can be generated.

Whether you install a simple water wheel and DC generator or a more complex small scale hydro power plant, using hydro energy to power your home can be easier than you think. With a grid connected system you can even sell excess electricity you do not use back to the utility company who have been selling it to you for all these years giving you an additional income. Alternative Energy Tutorials is dedicated to showing you what you need to make Hydro Energy a reality!