The DC Generator is a Permanent Magnet Generator Design

The DC Generator gets its energy of motion from the wind or water turbine blades attached to its rotor shaft. Most AC generators are designed to run too fast to be coupled directly to these turbine blades so gearboxes or pulley systems are used to increase an AC generators speed. However, speed increasing gearboxes are complex mechanical items requiring good mechanical alignment and lubrication for reliable operation, so low rpm dc generators are ideal for this type of application. 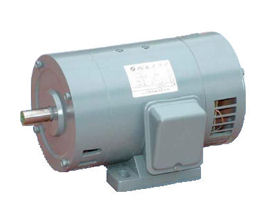 All dc generators have two parts, one part called the “stator”, as it is stationary, and the other part which moves or rotates called the “rotor”. Generally for a dc generator design, the magnetic field is on the stator and the power generating coil winding is on the rotor.

The rotating armature coils pass through this stationary, or static magnetic field which in turn generates an electrical current in the coils. When the armature coil is adjacent to the direction of the stator magnetic flux, maximum voltage is induced into the coil since the most magnetic lines of force are being cut by the coil. As the armature moves, its coil now becomes perpendicular to the stator magnetic flux, and no magnetic lines of force are being cut, therefore the induced voltage is zero at this instant. Then as the armature of the generator rotates in an endless cycle, its coils constantly cut the lines of magnetic flux and an alternating dc voltage is induced in them. This process is known as “electromagnetic induction”.

The two basic connections for a self-excited DC machine are the “Shunt Wound DC Generator”, were the field winding constructed with relatively many turns of small high resistance wire used to limit current flow through the field, is connected in parallel, or shunt with the armature. The “Series Wound DC Generator”, were the field winding is made with relatively few windings turns of very large wire of very low resistance is connected in series with the armature. Each type of DC generator construction has its own set of advantages and disadvantages and which one you use depends upon your application.

The current or amperage of a dc generator at any rpm is governed only by the connected battery load, and not by its rpm speed. As soon as the battery becomes fully charged, no more charging current flows and the load effectively disappears. If the dc generator continues to be driven the generators terminal voltage will rise and no matter how high the terminal voltage, if there is no load connected to the generator there is no current flow. Also if you run a dc generator with no load, the current will always be zero no matter how high its rotational speed.