Wind power is a commercially proven and rapidly growing form of electrical energy generation. Wind turbines provide clean, renewable, and cost-effective electricity around the world and are quickly becoming a major renewable energy technology after solar (sunshine) energy. The accepted classification of a wind turbine is given by its axis of orientation. Either as a Horizontal Axis Wind Turbine (HAWT) or as a Vertical Axis Wind Turbine (VAWT).

Three bladed horizontal axis wind turbines are everywhere, being a tried and trusted design with a long history of refinement and improvements. HAWT’s are widely used in large wind farm arrays across the countryside as well as in open offshore projects where the movement of the wind is cleaner, stronger and undisturbed.

However, due to high-rise buildings, trees, and large manmade structures, the pattern and flow of the wind around cities and urban areas is less predictable, more chaotic, and full of turbulence. This makes large horizontal aerofoil wind turbine designs less efficient in urban and semi-urban areas.

Vertical Axis Wind Turbines, or VAWT’s for short, are more appealing and better suited for use in cities and urban environments where the wind flow is less predictable. This makes VAWT’s a much better choice for both on-ground installation and/or mounting onto buildings and rooftops which would otherwise restrict the installation of taller horizontal turbine structures.

Also, this type of wind turbine generator is omnidirectional meaning that it does not require orientation of the blades into the oncoming wind, as by its design, it always does. Then VAWT’s do not have complicated yawning or tail-fin requirements to ensure it always faces in the correct direction.

Due in part to their simple low friction vertical blade design, vertical axis turbines have a relatively low cut-in wind speed allowing them to operate when surrounded by buildings and infrastructure no matter what the characteristics or direction of the wind. Another advantage of vertical axis wind turbines is that they can be positioned close to the point of use reduces the load on any existing grid infrastructure, promoting sustainability while reducing any environmental concerns.

Energy passes through the environment as a current or flow of wind. The maximum amount of power any wind turbine is able to extract from the wind depends greatly on its type, design and location. Horizontal wind turbines extract energy by slowing down the incoming wind using its rotor blades. If it wants to be 100% efficiency at doing this, the rotor blades would have to stop 100% of the wind, which is clearly not possible.

Vertical axis wind turbines represent a new type of power-generating technology designed for a smaller niche urban market. Generally, VAWT’s would have a fairly low visual and environmental impact around buildings as they are shorter in height than the traditional horizontal wind turbine. Also, their main working components, such as the generator and gearbox are located closer to the ground requiring less structural supports. This makes maintenance, inspection and repair of these turbine generators fairly easy.

Vertical axis wind turbines rotate about an axis perpendicular to the wind using a variety of different designs. Rotating vanes, cups or eggbeater designs are now very widely available, each with its own advantages and disadvantages.

Originally, vertical axis turbine structures were used for pumping water and crop irrigation in remote locations with the wind blowing from any direction and at low speed. Today, VAWT’s are an efficient solution for use in built-up areas where the wind is unstable with the design of VAWT categorized into two main types, Savonius (drag-driven) and Darrieus (lift-driven) designs.

The Savonius wind turbine design (named after its Finnish inventor) is a simple design based on the principle of “differential drag”. The Savonius rotor uses two offset semi-cylindrical aerofoils, half-cylinders or cups, mounted around a vertical shaft similar to the design used by wind speed anemometers.

Typically, Savonius designs consist of two or three cups, bowls per section, or two half semi-cylinders facing in opposite directions to the wind so that they form a sort of “S”-shape design attached to a vertical shaft. This means that it can only rotate in one direction as shown.

Then Savonius turbines work through the principal of drag as the cups have less drag when rotating in the direction of the wind and more drag when rotating against the wind. This effect of different forces is increased by the movement of the wind and air between the two (or three) cups, which inturn increases the driving torque of the shaft for use in electricity generation or water pumping.

However, because they only work on the principal of drag they are generally less efficient than other VAWT designs as only around 25 to 30% of the power available in the wind can be successfully extracted.

The main advantage of the Savonius rotor design is that it is very easy to rotate. Its inherent low cut-in wind speed and low tip-speed ratio allows it to extract the energy from any non-directional wind. Thus it is well suited to operate in many urban locations with low wind speeds as well as variable wind directions.

Savonius rotor vertical axis wind turbines are simple, low maintenance turbines which can be used in applications that don’t require much power generation. Homemade Savonius rotor designs have also been made from two halves of an oil drum for simple off-grid water pumping applications. But the most common application of a Savonius rotor is their use in wind speed anemometers that measure wind speed.

The Darrieus wind turbine rotor (named after its French inventor) uses two or three thin aerofoil blades or vanes which look like vertical blades or an egg-beater shaped design mounted onto a vertical shaft. The aerofoil shaped blades are positioned horizontally about the central shaft so provide better aerodynamic performance and a much simpler design than the Savonius rotor. The rotor can consist of two, three or more straight, curved or aerofoil shaped blades within its design. Two straight blades are commonly known as H-blade configuration.

The Darrieus rotor works on the principal of lift forces (similar to the horizontal aerofoil rotor) with maximum driving torque produced when the shaped blades are moving across the wind faster than the speed of the wind. This means that they can extract more usable energy from the wind per unit of swept area unlike the Savonius rotor.

As it rotates in a circular path through the air, each blade creates a small lifting force which results in a positive torque to the rotor similar to the aerodynamic forces on an airplane wing, and the greater the lifting force the greater the rotation. Mechanical power is delivered to the central shaft by some tangential force which transmits the power to the electrical generator below.

Unlike the previous Savonius rotor, a pure Darrieus rotor is not a self-starting machine so requires some external mechanism to initially get it going. That is the rotor must already be rotating before the wind can exerts a driving force upon it. Generally, a small Savonius rotor is incorporated onto the main Darrieus shaft to provide the required starting torque at low speeds.

The advantage of the Darrieus rotor design is that, once going, it can rotate at a fairly high tip-speed producing more power output than the Savonius rotor. Some high-end commercial vertical wind turbine blade design have hinged for variable tilt angles, which at high rotational speeds move position due to centrifugal forces and reduce the speed of rotation, thereby eliminating the danger of over speeding.

Wind Turbines are used to convert wind energy into electricity or for pumping water. The growth and acceptance of wind turbines in urban applications is still limited, but urban VAWTs have several advantages over their larger horizontal axis cousins. They can generate electricity locally for off-grid applications, reduce green house gas emissions from power stations, as well as help support sustainable development for the local community.

Vertical Axis Wind Turbines in the form of either Savonius or Darrieus rotor designs are a good fit for cities and urban areas which have weak and unstable wind speeds. The Savonius wind turbine rotates at a slower speed so is better suited to pumping water. The Darrieus wind turbine rotates at a higher speed so is better suited to electricity generation. However, Darrieus rotors are not self-starting.

As a result, hybrid Darrieus-Savonius rotors are now available which can extract more kinetic energy from a low or unpredictable wind speed for use in urban environments. One such design of a hybrid VAWTs is the NINILADY 300w Vertical Axis Wind Turbine which consists of an S-type Savonius rotor with three airfoil blades forming a Darrieus rotor to maximize the performance. It can generate electricity from a relatively low cut-in wind speed of 1.3m/s and achieve a rated output capacity of 300 Watts at 10 m/s. 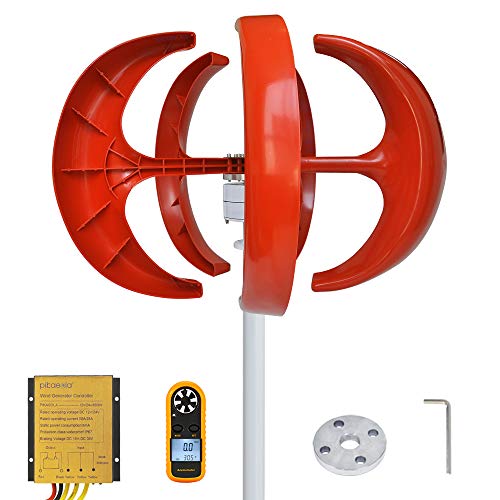 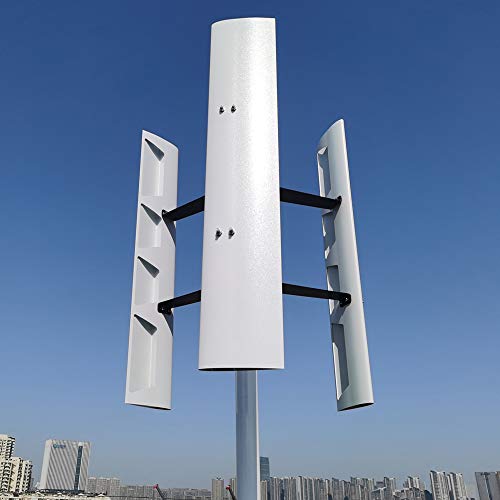 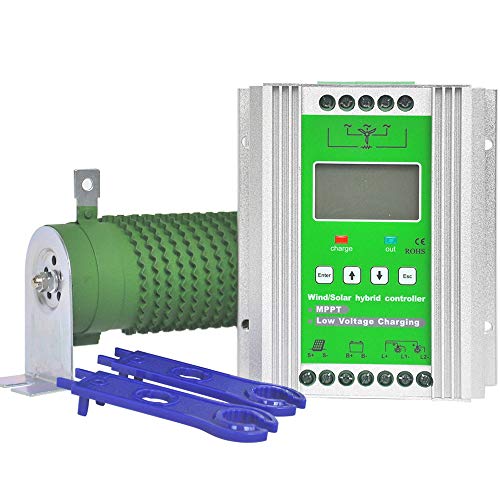 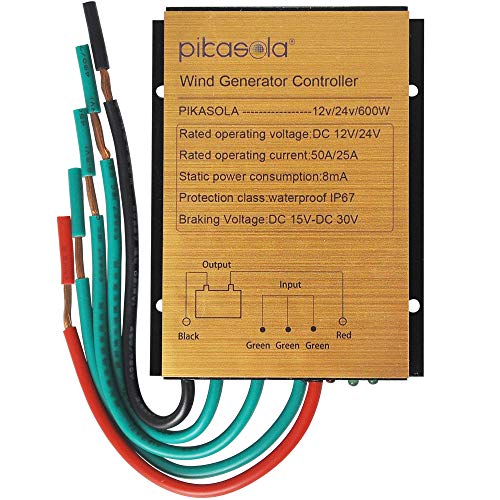 We hope this Vertical Axis Wind Turbine tutorial was useful and informative for you. Are you ready to share your thoughts
and experience with us and many others. Your comments are always welcome, just post them in the section below.