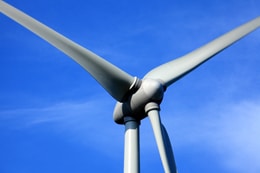 Wind energy has come along way over the last few decades or so, and most of us have seen many wind turbines arranged together both on-land and off-shore, which are known as “wind farms”, to capture large amount of power at once and feed it directly into the national grid. Back in the day the wind’s energy was only used to power sailing boats or drive windmills for irrigation and milling, but today through advancements in modern turbine and generator technology we can now use the wind’s energy to help power our homes. 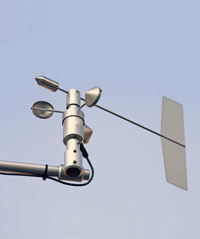 So it is important when siting a wind turbine as part of a wind energy system to know beforehand is there enough wind where you live and how fast the wind is actually blowing over a period of time. Wind speed is important because the amount of electricity that wind turbines can generate is directly determined by the wind speed, or velocity. Using a good quality anemometer like those made by Reed Instruments will help you determine the wind speed in your area.

A typical turbine requires wind speeds of about 10 miles (15 kilometres) per hour to start generating. This minimum wind velocity is generally referred to as the wind turbines cut-in speed. So for best results, a wind turbine should be positioned in an area where there is a consistent wind speed greater than this minimum cut-in speed before power starts being produced. But winds are three-dimensional things, and the characteristics of the wind depends very much on the elevation above the ground as well as across it.

Winds that are close to the ground are very turbulent due to the breaking up of the winds flow by the obstacles it encounters on the ground. If you are lucky enough to live in an area that has wind speeds between 10-20 mph (or 15-32 kph), then you are in business as the available wind power is proportional to the cube of the winds velocity, ( K*V3 ). In other words, if the wind speed doubles, you can get eight times the wind power from it up to the turbines maximum wind speed. Most commercial wind turbines have some form of automatic over speed protection which stops the rotor blades from spinning out of control in very high winds.

If wind resource maps are not available for your given location, the wind speed available in your location can be measured using a weather vane or a type of wind gauge known scientifically as an Anemometer. An anemometer is a device used to measure the velocity and direction of the wind giving an idea of the amount of wind energy available at a particular location. It is usually consists of a rotating, arrow-shaped instrument mounted on a shaft high in the air and is designed to point in the direction of the wind as shown in the image.

So now you can see how important it is to know is there enough wind where you live and what your average speed is in your area as ideally, a wind turbine should be operated at its maximum power output most of the time. But before you install a wind turbine you need to study the proposed site and height to determine the general wind power potential that exists there as well as the predicted energy production from the new wind turbine. After all, if you buy a new wind turbine you will want it to rotate as much as possible generating electricity and providing a quick return on your investment.

We have seen that wind turbines convert the kinetic energy in wind into mechanical power that runs a generator to produce clean electricity. Today’s turbines are versatile modular sources of electricity. Their blades are aero-dynamically designed to capture the maximum energy from the wind. The wind turns the blades, which spin a shaft connected to a generator that makes electricity.

As long as the sun continues to shine we will never run out of wind, which makes it a great source of renewable energy. Wind energy has shown to be one of the most abundant forms of renewable energy freely available around the globe and is a viable option to complement other types of pollution-free generation. The potential for domestic wind power has grown considerably in the last few decades due to advances in technology helping us reduce our dependency on fossil fuels, decreasing greenhouse gas emissions. But before we can purchase or install our wind turbine we need to measure and understand the wind speed and its strength for our given location to understand is there enough wind where you live.

To learn more about “Wind Turbine Generators”, or obtain more wind energy information about the various wind turbine generating systems available, or to explore the advantages and disadvantages of wind energy, then why not Click Here to get your copy of one of the top “Wind Turbine Guides” today direct from Amazon.