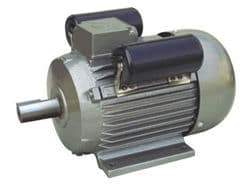 Rotating electrical machines are commonly used in wind energy systems and most of these electrical machines can function as either a motor or a generator, depending upon its particular application. But as well as the Synchronous Generator we looked at in the previous tutorial, there is also another more popular type of 3-phase rotational machine that we can use as a wind turbine generator called an Induction Generator.

Both the synchronous generator and the Induction Generator have similar fixed stator winding arrangement which, when energised by a rotating magnetic field, produces a three-phase ( or single phase ) voltage output.

However, the rotors of the two machines are quite different with the rotor of an induction generator typically consisting of one of two types of arrangement: a “squirrel cage”, or a “wound rotor”.

Induction Generator construction is based on the very common squirrel-cage induction motor type machine as they are cheap, reliable, and readily available in a wide range of electrical sizes from fractional horse power machines to multi-megawatt capacities making them ideal for use in both domestic and commercial renewable energy wind power applications.

Also, unlike the previous synchronous generator which has to be “synchronised” with the electrical grid before it can generate power, the induction generator can be connected directly to the utility grid and driven by the turbines rotor blades at variable wind speeds

For economy and reliability many wind power turbines use induction motors as generator which are driven through a mechanical gearbox to increase their speed of rotation, performance and efficiency. However, induction generators require reactive power usually provided by shunt capacitors in the individual wind turbines.

Induction machines are also known as Asynchronous Machines, that is they rotate below synchronous speed when used as a motor, and above synchronous speed when used as a generator. So when rotated faster than its normal operating or no-load speed, an induction generator produces AC electricity. Because an induction generator synchronises directly with the main utility grid – that is, produces electricity at the same frequency and voltage – no rectifiers or inverters are required.

However, the induction generator may provide the necessary power directly to the mains utility grid, but it also needs reactive power to its supply which is provided by the utility grid. Stand alone ( off-grid ) operation of the induction generator is also possible but the disadvantage here is that the generator requires additional capacitors connected to its windings for self-excitation.

Three-phase induction machines are very well suited for wind power and even hydroelectric generation. Induction machines, when functioning as generators, have a fixed stator and a rotational rotor the same as for the synchronous generator. However, excitation (creation of a magnetic field) of the rotor is performed differently and a typical design of the rotor is the squirrel-cage structure, where conducting bars are embedded within the rotors body and connected together at their ends by shorting rings as shown.

As already mentioned at the beginning one of the many advantages of the asynchronous machine is that it can be used as generator without any additional circuitry, such as an exciter or voltage controller, when it is connected to a three-phase mains supply. When an idle asynchronous generator is connected to an alternating current grid, voltage is induced into the rotor winding, similar to a transformer with the frequency of this induced voltage being equal to the frequency of the applied voltage.

As the squirrel cage rotors conducting bars are short-circuited together, a large current flows around them and a magnetic field is created inside the rotor causing the machine to rotate.

Since the rotor cage magnetic field follows the stators magnetic field, the rotor accelerates up to synchronous speed set by the frequency of the grid supply. The faster the rotor rotates, the lower is the resulting relative speed difference between the rotor cage and the rotating stator field and thus the voltage induced into its winding.

The difference in rotational speed between the stators rotating magnetic field and the rotor speed is referred to in induction machines as “slip”. Slip must exist for there to be torque at the rotor shaft. In other words, “slip”, which is a descriptive way of explain how the rotor is continually “slipping-back” from synchronisation, is the difference in speed between the stators synchronous speed, given as: ns = ƒ/P in rpm, and the rotors actual speed nR also in rpm, and which is expressed as a percentage, ( %-slip ).

Then the fractional slip s, of an induction machine is given as:

Torque/Speed Characteristics of an Induction Machine

At standstill, the stators rotating magnetic field has the same rotational speed with respect to both the stator and the rotor as the frequency of the rotor and stator currents are the same, therefore at standstill slip is positive and equal to one ( s = +1 ).

If the speed of the generator is driven above this synchronous speed by external means the resultant effect will be that the rotor will rotate faster than the rotating magnetic field of the stator and the polarity of the induced rotor voltage and current is reversed.

The result is that the slip now becomes negative ( s = -1 ), and the induction machine generates current at a leading power factor back into the mains utility grid. The power transferred as an electromagnetic force from the rotor to the stator can be increased by simply rotating the rotor faster which will then result in an increase in the amount of electricity generated. The torque characteristics of an induction generator ( s = 0 to -1 ) is a reflection of the induction motor characteristics ( s = +1 to 0 ) as shown.

The speed of the induction generator will vary with the rotational force (moment, or torque) applied to it by the winds energy but it will continue to generate electricity until its rotational speed falls below idle. In practice, the difference between the rotational speed at peak generating power and at idle, (synchronous speed) is very small, only a few percent of the maximum synchronous speed. For example, a 4-pole generator with a synchronous idle speed of 1500 rpm attached to the utility grid with a 50 Hz current, may produce its maximum generated power rotating at only 1-to-5% higher, (1515 to 1575 rpm), easily achieved using a gearbox.

This is a very useful mechanical property that the generator will increase or decrease its speed slightly if the torque varies. This means that there will be less wear and tear on the gearbox resulting in low maintenance and long service life and this is one of the most important reasons for using an Induction Generator rather than a synchronous generator on a wind turbine which is directly connected to the electrical utility grid.

We have seen above that an induction generator requires the stator to be magnetised from the utility grid before it can generate electricity. But you can also run an induction generator in a stand alone, off-grid system by supplying the necessary out-of-phase exciting or magnetising current from excitation capacitors connected across the stator terminals of the machine. This also requires that there is some residual magnetism in the rotors iron laminations when you start the turbine. A typical circuit for a three-phase squirrel-cage induction machine for use off-grid is shown below. The excitation capacitors are shown in a star (wye) connection but can also be connected a delta (triangular) arrangement.

The excitation capacitors are standard motor-starting capacitors that are used to provide the required reactive power for excitation which would otherwise be supplied by the utility grid. The induction generator will self-excite using these external capacitors only if the rotor has sufficient residual magnetism.

By doing this the generator will run more smoothly operating nearer to unity (100%) power factor (PF). In the single-phase operation, it is possible to obtain near three phase efficiency producing approximately 80% of the machines maximum rating. However, care must be taken when converting a 3-phase supply into a single-phase supply as the single phase line-to-line voltage output will be twice that of the rated winding.

Induction generators work well with single-phase or three-phase systems that are interconnected to the utility or as a self-excited stand alone generator for small scale wind power applications allowing for variable speed operation. However, induction generators require reactive excitation to operate at full power thus they are ideally suited for interconnection to the utility grid as part of an grid-tied wind power system.